Getting started with Red Hat OpenShift Service on AWS (ROSA)

Learn how to get started on Red Hat® OpenShift® Service on AWS, including how to use AWS Security Token Service (STS) to deploy a cluster. Once you’ve finished, proceed to part two and learn how to deploy an application on your new cluster.

Learn how to get started on Red Hat® OpenShift® Service on AWS, including how to use AWS Security Token Service (STS) to deploy a cluster. Once you’ve finished, proceed to part two and learn how to deploy an application on your new cluster.

Resources in this path

What is Security Token Service (STS) in Red Hat OpenShift Service on AWS?

After reading this resource, you will know:

What are the different "options" (credential methods)?

In the documentation, you might have seen references to deploying a cluster or deploying it “with STS” and wondered what the differences are.

There are currently two supported methods for granting those permissions:

When ROSA was first released there was only one method, the option with IAM users. This method requires an IAM user with the AdministratorAccess policy (limited to the AWS account using ROSA), which allows the installer to create all the resources it needs, and allows the cluster to create/expand its own credentials as needed.

Since then, we have been able to improve the service to implement security best practices and introduce a method that utilizes AWS STS. The STS method uses predefined roles and policies to grant the AWS account service the minimal permissions needed (least-privilege) in order to create and operate the cluster.

While both methods are currently enabled, the “with STS” method is the preferred and recommended option.

As stated in the AWS documentation, AWS STS “enables you to request temporary, limited-privilege credentials for AWS identity and access management (IAM) users or for users you authenticate (federated users).”

In this case AWS STS can be used to grant the ROSA service limited, short term access to resources in your AWS account. After these credentials expire (typically an hour after being requested), they are no longer recognized by AWS and no longer have any kind of account access from API requests made with them.

What makes this more secure?

How does ROSA use STS?

ROSA uses STS to grant permissions defined as least-privilege policies to specific and segregated IAM roles with short-term security credentials. These credentials are associated to the IAM roles that are specific to each component and cluster that makes AWS API calls.

This better aligns with principles of least-privilege and is much better aligned to secure practices in cloud service resource management.

The CLI tool manages the STS roles and policies that are assigned for unique tasks and takes action upon AWS resources as part of OpenShift functionality. One drawback of using STS is that roles and policies must be created for each cluster.

To make this even easier, the installation tools provide all the commands and files needed to create them, as well as an option to allow the CLI to perform the creation of these roles and policies automatically using automatic mode. Please see the Red Hat documentation for more information about the different --mode options.

What components are specific to ROSA with STS?

What is the process for deploying a cluster that uses STS?

Please don’t let the steps below intimidate you. You are not expected to create these resources from scratch.

The CLI will create the required JSON files for you, and will output the commands you need to run. The CLI can also take this a step further and do it all for you, if desired.

Steps to deploy a cluster that uses STS

These roles and policies can be created automatically by the CLI or they can be manually created by utilizing the --mode manual or --mode auto flags in the CLI. See the documentation for details about the modes, or see the Deploy the cluster section in this learning as well.

How does ROSA with STS work?

Trust policies will also be created for the EC2 service (allowing workloads on EC2 instances to assume roles and get credentials). Then the user assigns to each role its corresponding permissions policy.

After the account-wide roles and policies are created, we can proceed with creating the cluster.

Once we initiate cluster creation, we can create the operator related roles, so that the operators on the cluster can make AWS API calls. These roles are then assigned to their corresponding permission policies that were created earlier, along with a trust policy to an OIDC provider.

These roles are a bit different from the account-wide roles in that they represent the operators on the cluster (which ultimately are pods) that need access to AWS resources. We cannot attach IAM roles to pods, so we now need to create a trust policy with an OIDC provider so that the pods (comprising the operator) can have access to the roles they need.

Once we’ve assigned the roles to the corresponding policy permissions, the final step is to create the OIDC provider. 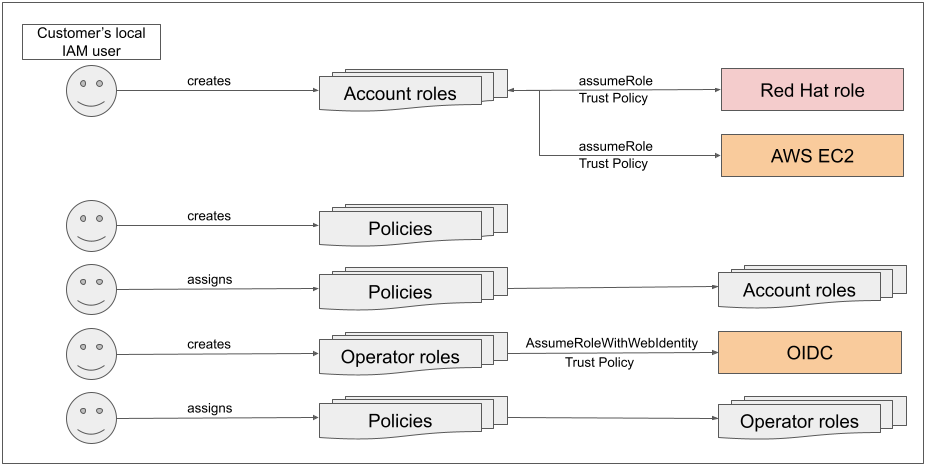 After this process has completed, when a role is needed, the workload, currently using the Red Hat role, will assume the role in the AWS account, obtain temporary credentials from AWS STS, and begin performing the actions (via API calls) within the customer's AWS account, as permitted by the assumed role’s permissions policy.

It should be noted that these credentials are temporary and have a maximum duration of 1 hour.

Placing this all together we can see the following flow and relationships: 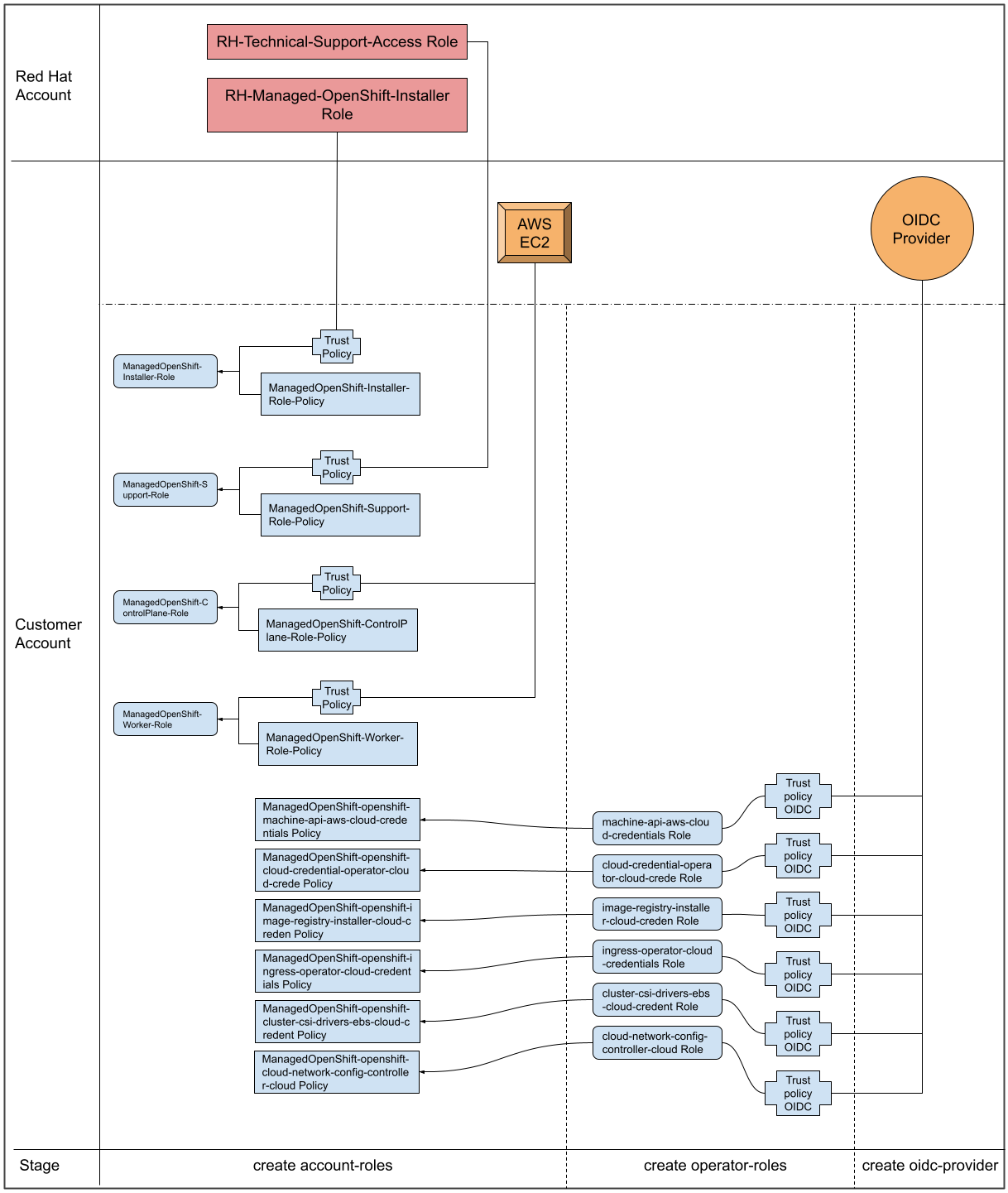 Operators in the cluster use the following process to get credentials in order to perform their required tasks. As we saw above, each operator has an operator role, a permissions policy, and a trust policy with an OIDC provider. The operator will assume-role by passing a JWT that contains the role and a token file (web_identity_token_file) to the OIDC provider, which then authenticates the signed key with a public key (created at cluster creation time and was stored in an S3 bucket).

It will then confirm that the subject in the signed token file that was sent matches the role in the role trust policy (this way we ensure that you can get only the role allowed). Then it will return the temporary credentials to the operator so that it can make AWS API calls.

Here is an illustration of this concept:

To illustrate how this works, let's take a look at two examples:

Now that you know these key concepts, you are ready to deploy a cluster.

This learning path is for operations teams or system administrators

Developers may want to check out developers.redhat.com.