Windows Containers Bring Your Own Host

With this latest release of the WMCO, we have provided support for administrators to bring your own host”(BYOH) when adding Windows Server nodes. With BYOH support, administrators no longer need to use premade images on the hyperscalers or create a generic template on vSphere. Now, an administrator can install Windows Server 2019 version 2004 and add it as an OpenShift node ad-hoc. This provides support for platform agnostic bare metal UPI installs and vSphere UPI installs as well.

In this blog, I will be going over how to prepare and install a Windows Server node for Windows Containers using the BYOH method on vSphere.

The prerequisites are as follows:

The Windows Server specific requirements will be covered in a later section. For more information on Windows Containers, please refer to the official documentation. Pay special attention to the networking setup installation requisites as, noted earlier, they can only be done at installation time.

Once the cluster has been installed, you can verify if the prerequisites were set up correctly before proceeding with the Windows Containers setup. There are not many platform prerequisites, but they are important. So make sure you take the time to verify if they were installed correctly.

Make sure that OpenShift version 4.8 or newer is installed:

Next, make sure that OVNKubernetes was installed as the SDN network type:

Finally, make sure that hybrid-overlay networking was set up during installation:

For more information about installing an OpenShift 4 cluster, please consult the official documentation. In this blog, I am testing out a vSphere installation; but the networking prerequisites for Windows Containers is the same no matter what platform you end up installing on.

Once the cluster is installed and you have verified that the prerequisites were satisfied, you can proceed to install the Windows Machine Config Operator (WMCO). The WMCO is the entry point for OpenShift administrators who want to run containerized Windows workloads on their clusters. You can install this Operator as a Day 2-task from the Operator Hub.

Login to your cluster as a cluster administrator and navigate to Operators ~> OperatorHub using the left side navigation: 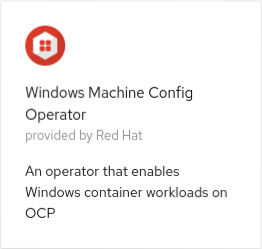 This will bring up the overview page. Here, you will click on the “Install” button: 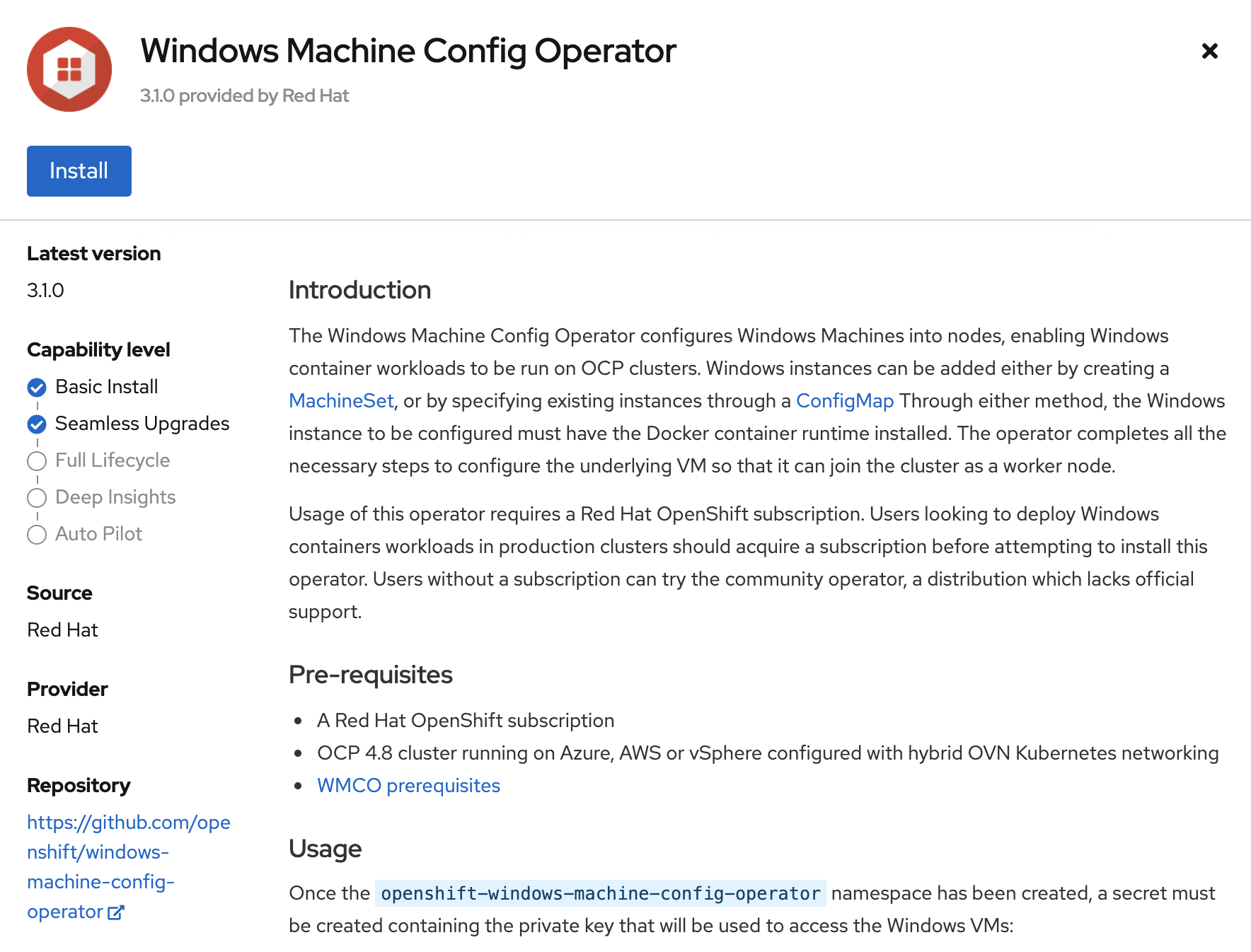 On the Install Operator overview page, make sure you have “stable” selected in the "Update channel" section. Also, in the "Installation mode" section, leave “A specific namespace on the cluster” selected. Leave the "Installed Namespace" section as “Operator recommended Namespace” and tick on “Enable Cluster Monitoring”. Finally, leave the "Approval strategy" as “Automatic”. Then click “Install”: 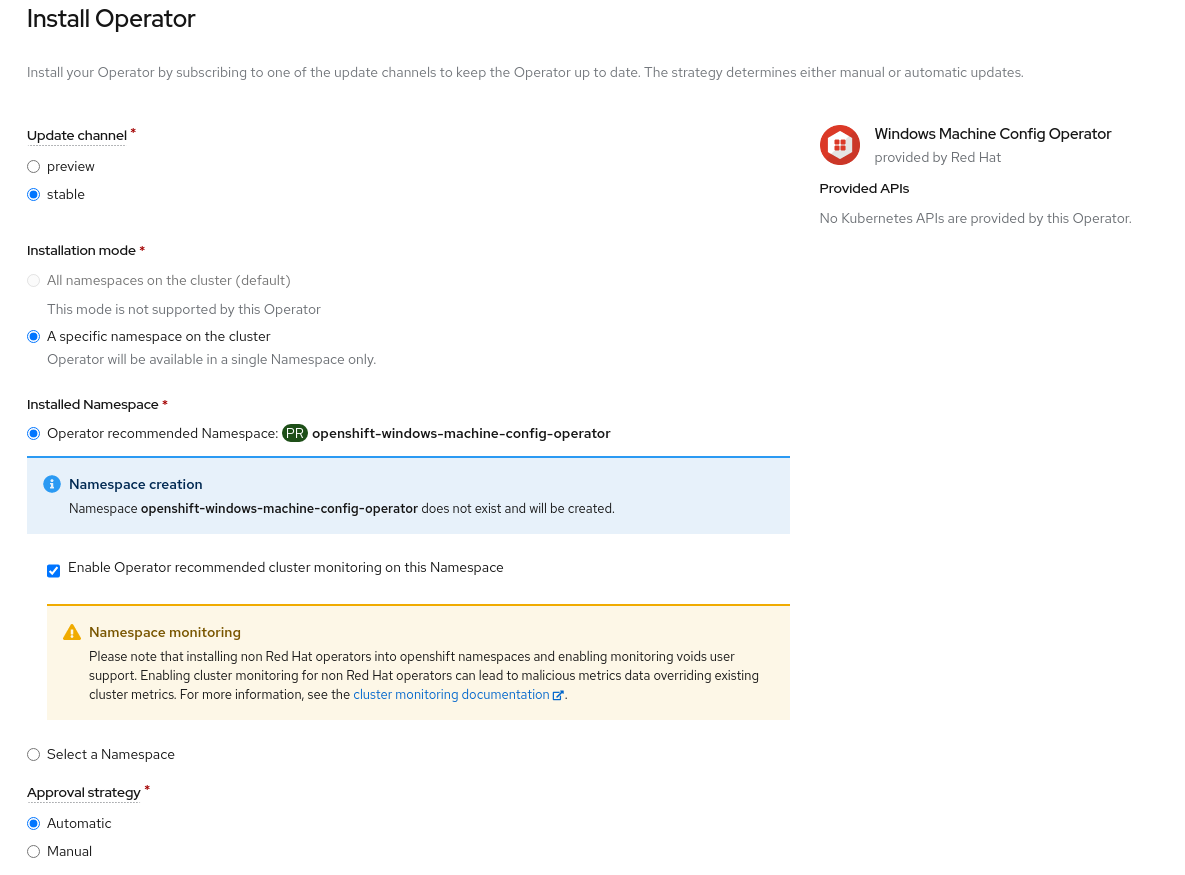 The "Installing Operator" status page will come up. This will stay up during the duration of the installation:

When the screen says "ready for use," the WMCO Operator is successfully installed:

You can verify the Operator has been installed successfully by checking to see if the Operator Pod is running:.

Once the WMCO is installed and running, you will need to create/provide an SSH key for the WMCO to use. This same SSH key is also going to be installed on the Windows node and will be the way the WMCO configures it for OpenShift. You can use an existing SSH key. If you do not have one, or would like to create one specifically for Windows Nodes, you can do so by running:

Once you have your key ready, add the private key as a secret for the WMCO to use in the openshift-windows-machine-config-operator namespace.

Please note that you can only have one Windows Server SSH key pair in the cluster. There is no way, currently, to provide a key pair per individual Windows Server.

For more information about how to install the WMCO, please refer to the official documentation.

Setting Up the Windows Server

The first step in setting up your Windows Node is to install the Docker runtime. I am running the following PowerShell script to install Docker:

Once you run the above script (or the individual commands), you will need to reboot the Windows node for docker to start working:

Once the Windows node is up and running, you should be able to run docker from the CLI:

The next thing that needs to be done is install SSH and open port 22 for the Windows node. SSH is used by the WMCO to set up and configure the Windows node to be a Kubernetes node. I will be using the following script:

Please note that the script is shown only as an example, and is in no way supported by Red Hat.

This script will require the public key of the ssh keypair you created earlier passed to it as an argument. The script will install SSH, enable the service to start on boot, create the firewall rule, and place the public key in the appropriate authorized_keys file:

For more information about how to install and configure SSH on Windows Server, please see the official Microsoft documentation.

Next thing is that we have to make sure that port 10250 is open for log collection to function. The below was taken from the following script:

Finally, we must make sure that the hostname of the Windows node follows the RFC 1123 DNS label standard. In short:

Another thing to note is that the WMCO does not like capital letters in the hostname. Set the hostname to the short DNS name. You will also need to restart the Windows node:

Once the Windows Node is rebooted, it is ready to be added as a Windows node.

Adding the Windows Server as an OpenShift Node

Now that the WMCO is installed and the Windows Node is set up, you can add it as an OpenShift Node. The WMCO watches for a configMap named windows-instances to be created in the openshift-windows-machine-config-operator namespace, describing the instances that should be joined to a cluster. The required information to configure an instance is:

Each Windows node entry in the data section of the ConfigMap should be formatted with the IP address of the Windows node as the key, and a value with the format of username=<username>. In my environment, the configmap looks like this:

The installation/setup of the Windows node can take some time. But after a while, you will see the following in the logs:

You should now see the Windows Server added as an OpenShift Node:

To add another Windows Node, you just need to edit the configmap by running oc edit configmap/windows-instances -n openshift-windows-machine-config-operator and adding an entry. For example:

Windows nodes can be removed by removing the instance's entry in the ConfigMap. This will revert the Windows node back to the state that it was in before, barring any logs and container runtime artifacts.

For example, in order to remove the instance 192.168.1.92 from the above example, the ConfigMap would be changed to the following:

For a Windows node to be cleanly removed, it must be accessible with the current private key provided to WMCO.

Now that we have a Windows OpenShift Node up and running, we can test running a sample Windows Container. Before we begin, you will have to keep a few things in mind.

Another thing to keep in mind is that Windows Container images can be VERY large. In some cases, a small base image can be 8GB in size. This can pose trouble for the Kubernetes scheduler which has a default timeout of 2 minutes. To work around this, it is suggested to pre-pull any base images you need. For example, I can login to my Windows node and pull the image with the following command:

After it has been pulled onto the host, you should see it as a list of local images:

Take a note of this taint. We will be deploying this sample web application. Let's take a look at the Deployment as I would like you to take note of two things.

First, you will notice in this section that there is a toleration in place for the taint of the Windows node:

Second, in this section you will see that there is a node selector in place that will target nodes that have the label “windows” as the OS:

This effectively says that this workload will deploy to nodes labeled as Windows nodes and will tolerate the Windows node taint. Go ahead and deploy this application.

This will create the win-test-workload namespace along with the win-webserver service with a deployment named win-webserver. You can check the status of the pod to see where it is running:

As you can see, it is running on the Windows node. You can verify this by logging into the Windows Node as see the running containers by running the docker ps command:

You can expose the route of this application just like any other application running on OpenShift:

Curling the URL (or visiting it on a browser) should return the following:

Red Hat OpenShift for Windows Containers brought the ability to run containerized Windows-based applications in your Azure, AWS, and vSphere IPI installs. In this blog, we introduced a new feature that allows you to “bring your own host” to Windows Containers. This adds the support for Non-Integrated Platform Agnostic Bare Metal UPI installs, and for vSphere UPI Installs as well. This provides OpenShift Administrators with even more flexibility when running in their heterogeneous environments.

We invite you to try out the Windows MachineConfig Operator v3.0 and do not forget to catch “Ask and OpenShift Admin” on Red Hat Live Streaming, weekly at 11 a.m. Eastern Time Zone. This show is dedicated to OpenShift administrators, providing an open forum to ask questions and discover new tips and tricks. Please watch episode 43 where we go over Windows Containers BYOH, and stay tuned for future streams involving Windows Containers.

Windows Containers Bring Your Own Host