According to our recent survey of IT decision-makers, security is the biggest area of concern relating to container adoption, with security issues causing application deployment delays among 54% of the respondents.

Kubernetes is, first and foremost, a tool for development and DevOps teams to accelerate and scale containerized application development, deployment, and management. Providers such as Red Hat, Amazon, Microsoft, and Google have added security features to enhance the base capabilities in Kubernetes. At the same time, commercial security vendors have stepped up to offer enterprise-ready security solutions for more advanced use cases.

Below, you will find the top eight most popular open source Kubernetes security tools identified by our survey respondents. 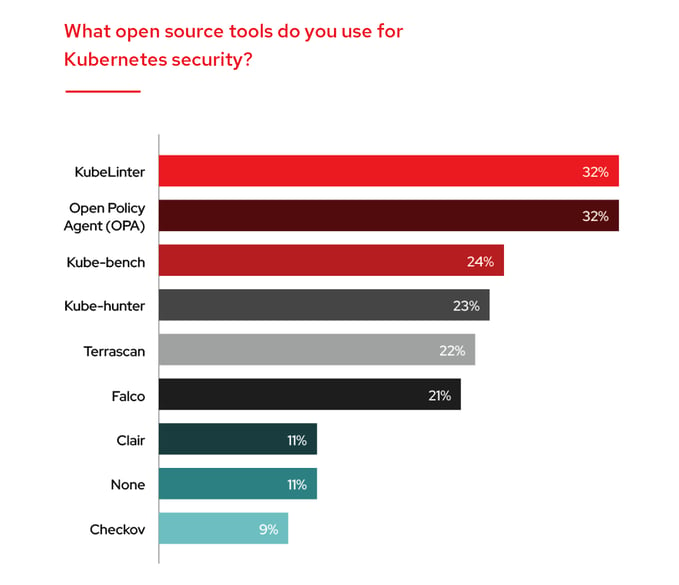 32% of respondents secure Kubernetes with the Open Policy Agent (OPA). While OPA is a general-purpose policy engine, it is a very powerful tool for enforcing context-aware security policies. With the deprecation of Pod Security Policy initiated as of Kubernetes v.1.21 (and complete removal by v.1.25), many organizations will likely turn to OPA to fill in that gap.

KubeLinter ships with default checks, designed to give you useful information about your Kubernetes YAML files and Helm charts. This helps teams check early and often for security misconfigurations and DevOps best practices. Some common examples of these include running containers as a non-root user, enforcing least privilege, and storing sensitive information only in secrets.

Nearly a quarter of respondents use Kube-bench, a tool that audits Kubernetes settings against security checks recommended in the CIS Benchmark for Kubernetes. The scans are configured using YAML files, and the tool itself is written in Go, a familiar language to Kubernetes developers.

This tool is particularly useful when self-managing the control plane components.

Built by the same team behind Kube-bench, Kube-hunter looks for exploitable security weakness in Kubernetes clusters. One of the more useful features of Kube-hunter is the ability to exploit the vulnerabilities it discovers to look for further exploits. 23% of respondents use Kube-hunter.

Built on top of OPA, Terracan is an open source static code analyzer for Infrastructure as Code that is used by 22% of respondents. With over 500+ Policies for security best practices across various applications, including Terraform, Kubernetes (JSON/YAML), AWS, Azure, GCP, Kubernetes, and GitHub, Terrascan can detect security vulnerabilities and compliance violations and mitigate risks before provisioning infrastructure.

The only open source tool in this list that is built for runtime security, Falco is used by 21% of respondents to protect running containerized applications in Kubernetes. Falco also provides security policies that use contextual data from Kubernetes and kernel events to detect anomalous application behavior indicative of a threat.

Clair is an open source security tool used for scanning container images for known vulnerabilities. Clair is a static analysis tool, so it will not be able to detect vulnerabilities at runtime. Clair is used by 11% of respondents.

Similar to Terrascan, Checkov is a static code analyzer for Infrastructure as code that is used by 9% of respondents. The latest version of Chekov introduced context-based analysis. It detects misconfigurations using graph-based scanning of cloud infrastructure that is provisioned with applications such as Terraform, Terraform plan, Cloudformation, Kubernetes, Dockerfile, Serverless, or ARM Templates.

Log4Shell: Practical Mitigations and Impact Analysis of the Log4j Vulnerabilities

What is Log4Shell? Last week, one of the most critical 0-day vulnerabilities in several years was made public. This issue was found in the commonly used Java logging utility, Apache Log4j, version 2, ...