May 19, 2022 | by Mattia Mascia, Radu Domnu and Javier Bares Fernandez

When companies talk about security, they are referring to preventing data loss and securely automating and integrating applications.

That cannot be done without knowing who is doing what to which assets, and that is where identity management, like HashiCorp Vault, comes in. The “who” in the equation becomes very important.

As with most security objectives, there is usually tension between the requirement to make things secure and trying to get the actual work done. The art here is to balance the two conflicting requirements, one way to reduce the burden on the developer is to automate as much as possible.

In this blog, we will illustrate how OpenShift together with Cert Manager and HashiCorp Vault can be used to achieve an automated and reproducible process to increase the security of applications.

From the developer's point of view, this automated approach is easy to use and is also instrumented so that we know what is going on and can take appropriate action if it fails.

The purpose of a Certificate authority (CA) is to validate and issue certificates. A Certificate Authority may be a third-party entity or organization that runs its own provider to issue digital certificates.

If an Intermediate CA exists, it is positioned within the middle of a trust chain between the trust anchor, or root, and the subscriber certificate that is issuing subordinate CAs. So not use a root CA directly?

So, it is better to not expose it within target environments and to instead issue a shorter-lived intermediate CA. Using intermediate CA also aligns with industry best practices.

In large organizations, it may be ideal to delegate responsibility for issuing certificates to different certificate authorities for granular security controls appropriate to each CA.

For example, the number of certificates may be too large for a single CA to effectively track the certificates it has issued; or each departmental unit may have different policies and rules, such as validity periods; or it may be important to differentiate certificates for internal or external communication.

The X.509 standard includes a template for setting up a hierarchy of CAs:

Cert Manager is a tool for Kubernetes and OpenShift that automates certificate management in cloud-native environments.

It builds on top of these platforms to provide X.509 certificates and issuers as first-class resource types. 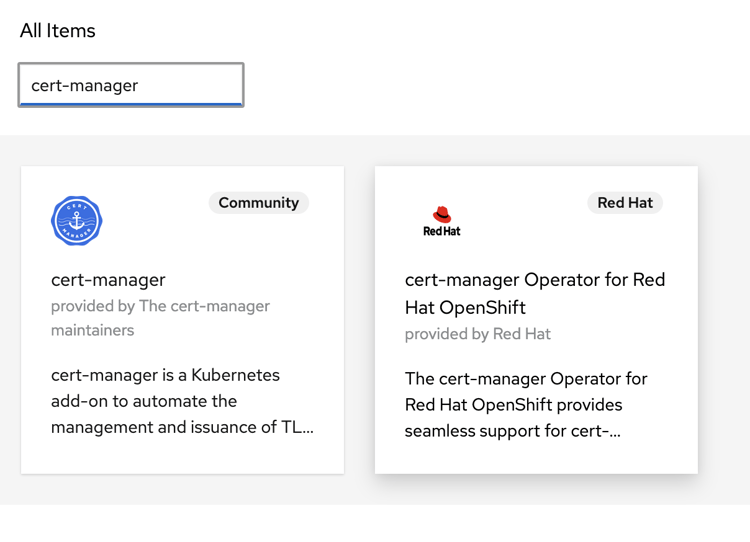 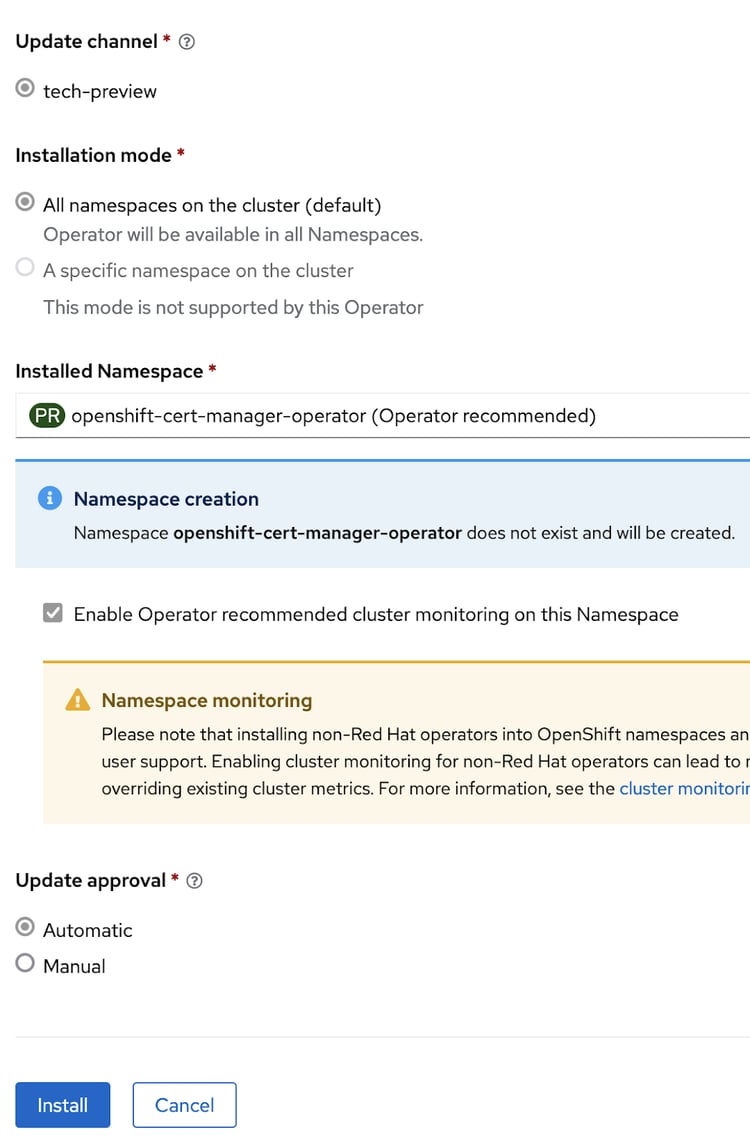 Let’s start from scratch and simulate the creation of our own certificate authority and building the CA hierarchy.

We are going to create the root CA certificate-key pair using ​​OpenSSL program. 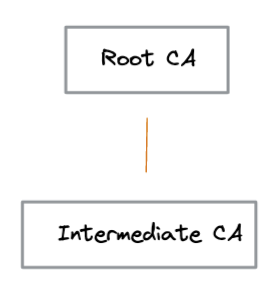 First, navigate to a directory for which the certificates will be created.

Now with the root CA, we can start with the second step of the chain: the intermediate CA.

Make sure the Country Name and the Common Name are defined, because the policy ( policy_strict ) entry on the openssl.cnf requires a matching_countryName_ and a defined commonName.

Our intermediate CA is now ready to be used.

The first thing you will need to configure after you have installed cert-manager is for an Issuer to be created, which can be then used to issue certificates.

The simplest issuer type is the CA, which references the Kubernetes TLS Secret containing a ca-key pair.

Before Vault can be installed, certificates must be provisioned within a newly created namespace.

First, define the namespace where we want to install Vault:

After the secret is created, we can apply a cert-manager Issuer CR of type CA to the cluster:

Let’s check the Issuer status to confirm it was successfully created:

NOTE:This specific Cert-Manager Issuer containing the Intermediate certificate authority is strictly used to sign the certificate of Vault only. No other applications will request certificates.

It is time to create a Certificate CR for HashiCorp Vault. First, let’s define some convenient variables:

NOTE: The generated certificate must be valid for both the Vault active service and the Vault Route.

Once cert-manager detects the creation of the Certificate CR, an SSL certificate will be generated on behalf of the internal intermediate certificate authority and save it as a Kubernetes TLS secret.

HashiCorp Vault is an identity-based secret and encryption management system.

A secret is anything you want to tightly control access to, such as API encryption keys, passwords, or certificates.

Vault provides encryption services that are gated by authentication and authorization methods. Using Vault’s UI, CLI, or HTTP API, access to secrets and other sensitive data can be securely stored and managed, tightly controlled (restricted), and auditable.

With the certificate now in pace, it is time to deploy and configure Vault.

The official way to install Hashicorp Vault is to use the Vault Helm Chart.

In production environments, it is deployed in a high-availability manner. HashiCorp Vault needs an underlying storage backend to store the data, and it can rely on its integrated storage, which uses the RAFT consensus algorithm.

When deploying to OpenShift, the integrated storage is a convenient solution for storing data, as this removes the burden of managing an additional storage component for storing Vault’s data. 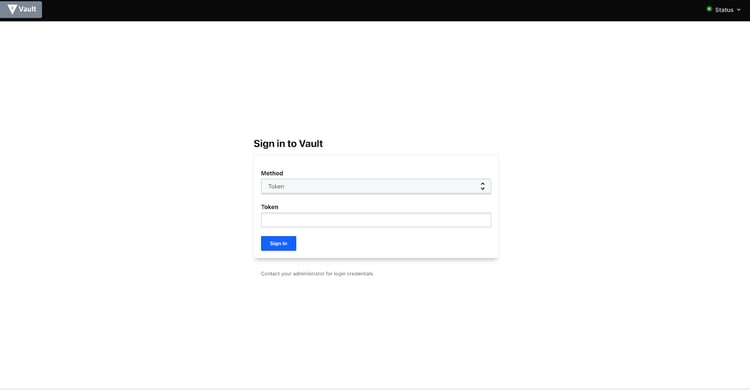 At this point, Vault is ready to be integrated into the OpenShift platform.

Vault, like all pods in Kubernetes, is configured with a service account that has permissions to access the TokenReview API. This service account can then be used to make authenticated calls to Kubernetes to verify tokens of the service accounts of pods that want to connect to Vault to get secrets.

The advantage of a Vault Config Operator is that we can now configure Vault by creating a set of custom resources (CRs), which in turn can be packaged as Helm charts or kustomize manifests and managed in a GitOps fashion. So, configuring Vault is no longer an imperative action, but is now declarative. Read more about the background and capabilities of the Vault Config Operator on this blog.

To install the Vault Config Operator, return to OpenShift Container Platform web console as a user with the cluster-admin role. 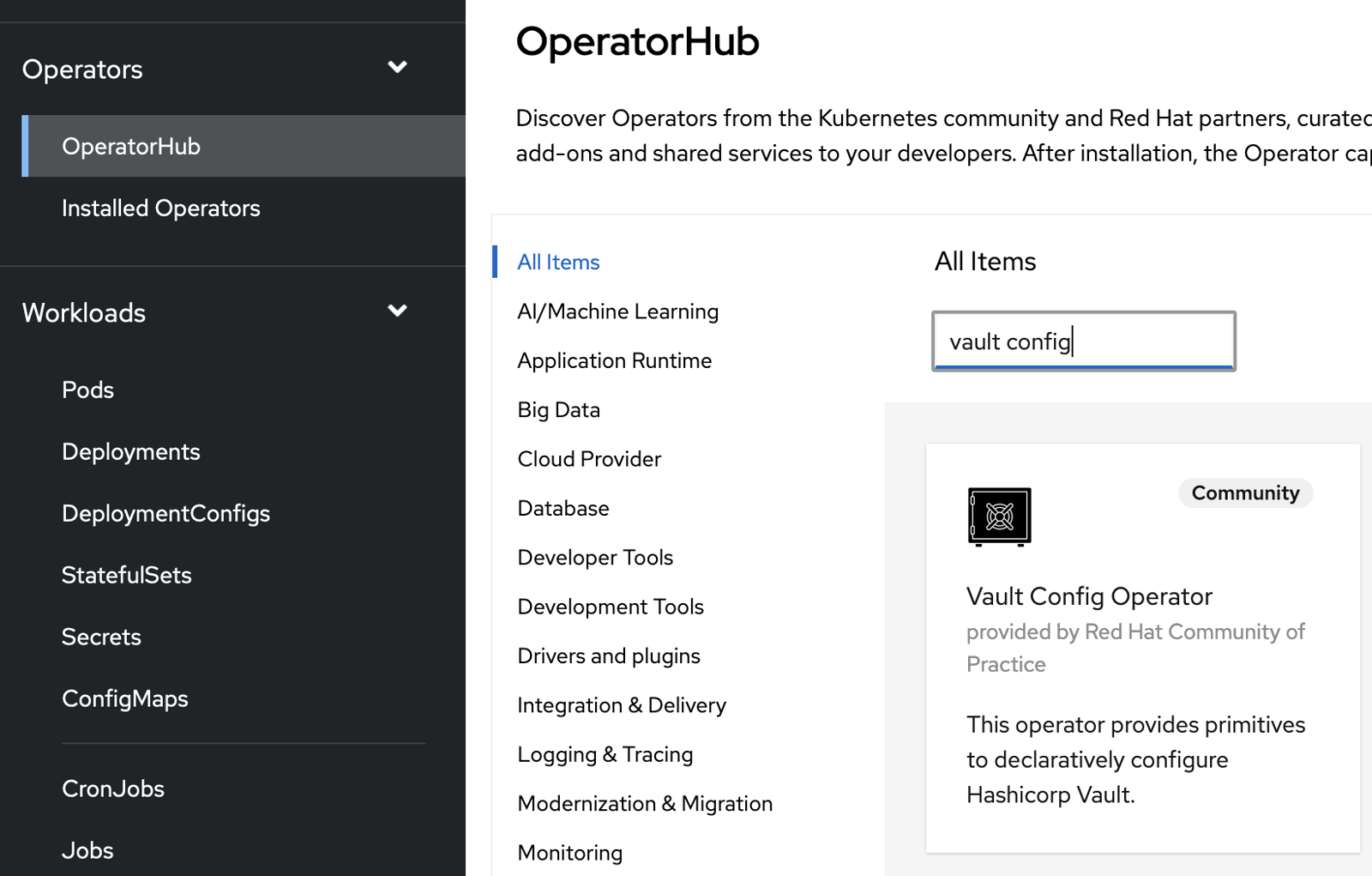 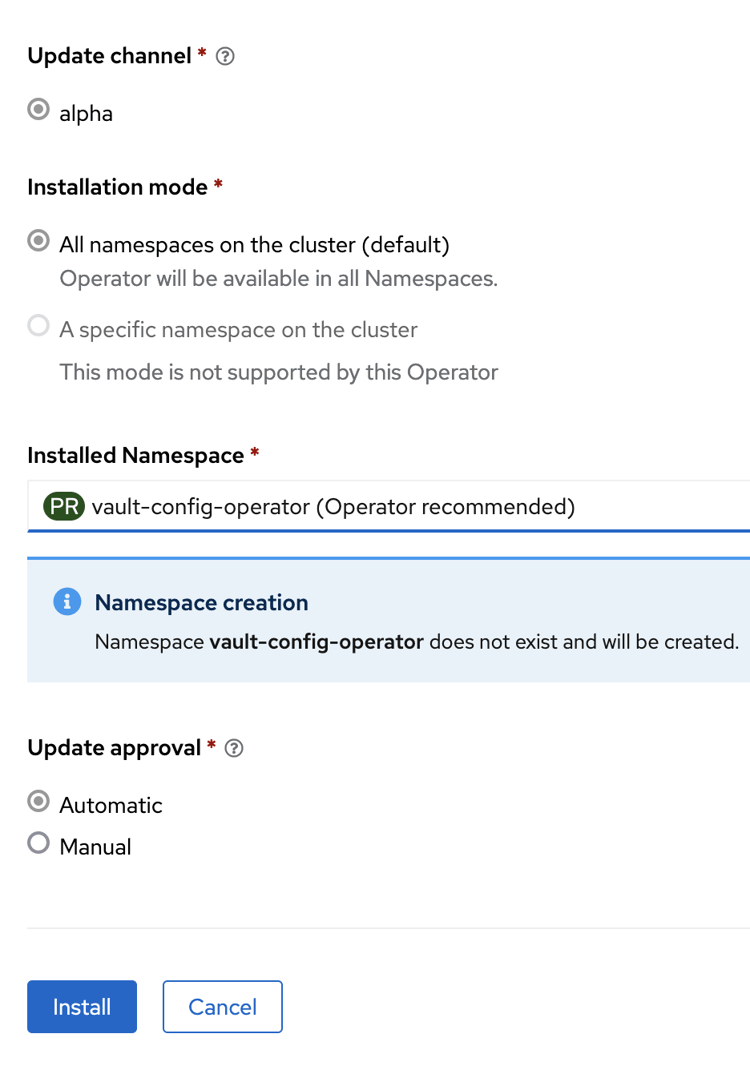 For the operator to trust the certificates presented by Vault, the recommended approach is to mount a Secret or ConfigMap containing the certificate as described here, and then configure the corresponding variables to reference the file locations in the path mounted into the container.

NOTE: this policy is intentionally broad to allow testing anything in Vault. In a real life scenario this policy would be scoped down. 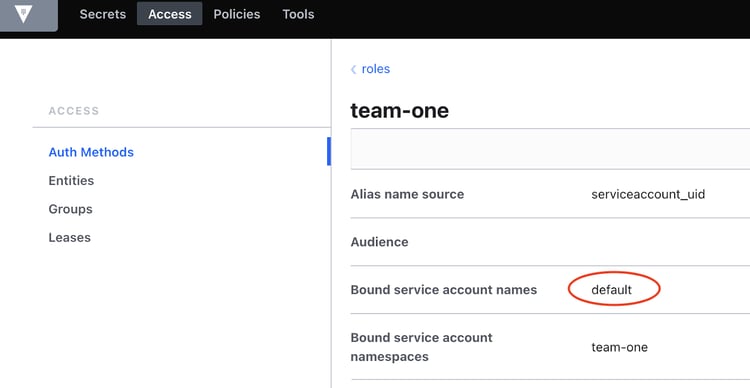 The patch of the subscription updates the Deployment of the vault-config-operator with the new configuration as show in the picture below.

The Vault PKI secrets engine generates dynamic X.509 certificates, without requiring all of the manual actions. 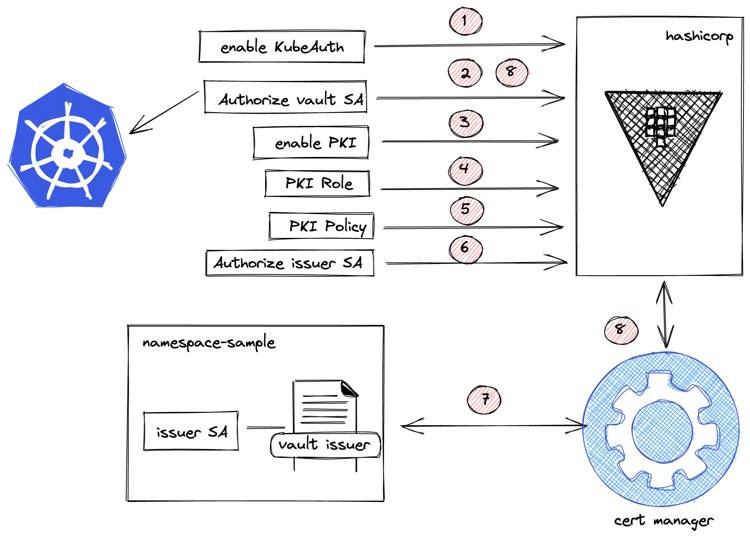 As seen in the diagram above, there are several steps to enable Vault to be a certificate manager in OpenShift. These steps are detailed below:

Thanks to the Vault Config Operator and cert-manager, define the relative customer resource and let them do the job for you.

It is time to create the CA chain hierarchy with an offline root CA and online intermediate CAs in Vault for each application namespace.

Having a dedicated intermediate CA per organization or team can increase security and gain greater control over the chain of trust in your ecosystem, allowing you to trust only certificates issued by your trust model. 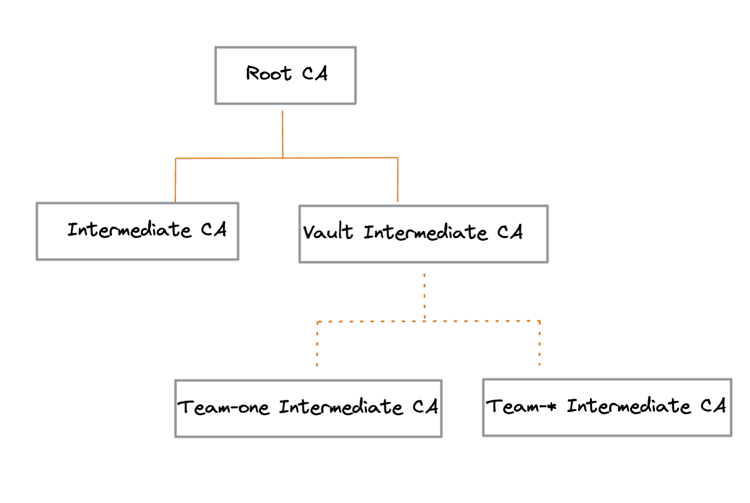 Note: PKISecretEngineConfig stays in error status until the signed certificate has been provided. 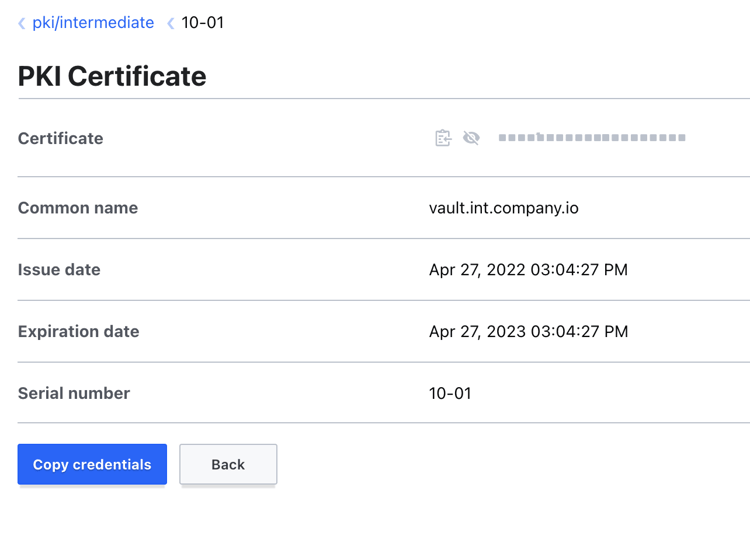 We walk through each step in the process; nevertheless, these steps can be automated in the future by leveraging the Namespace Configuration Operator. 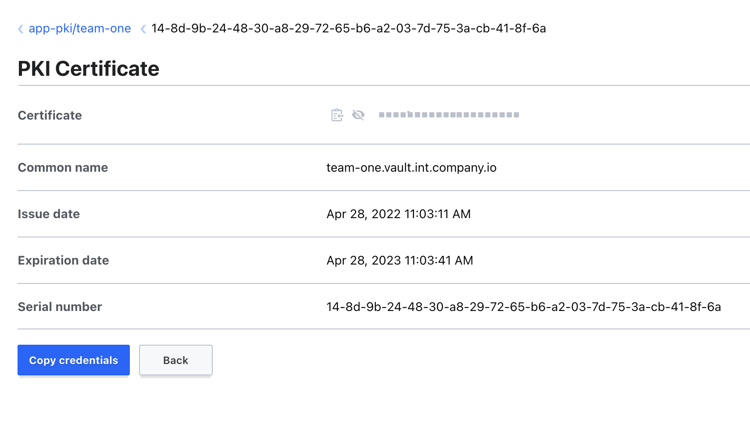 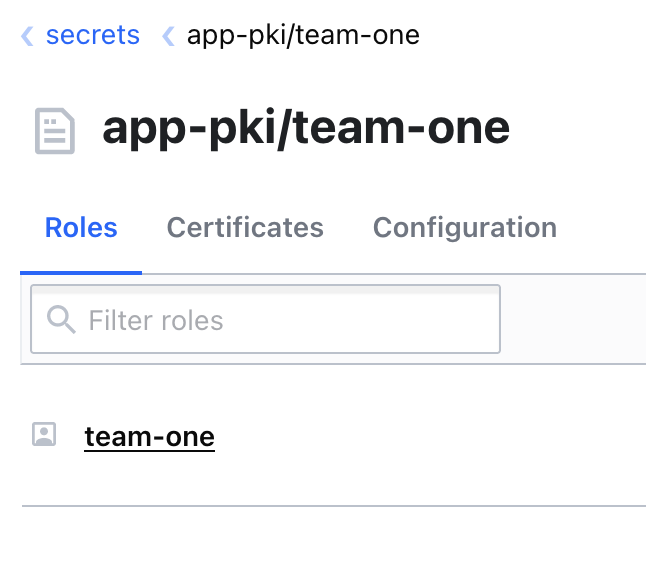 To demonstrate the end-to-end functionality, a demonstration application can be deployed consisting of two simple Quarkus client/server services that leverage mutual TLS communication through certificates provided by cert-manager and Hashicorp Vault integration. 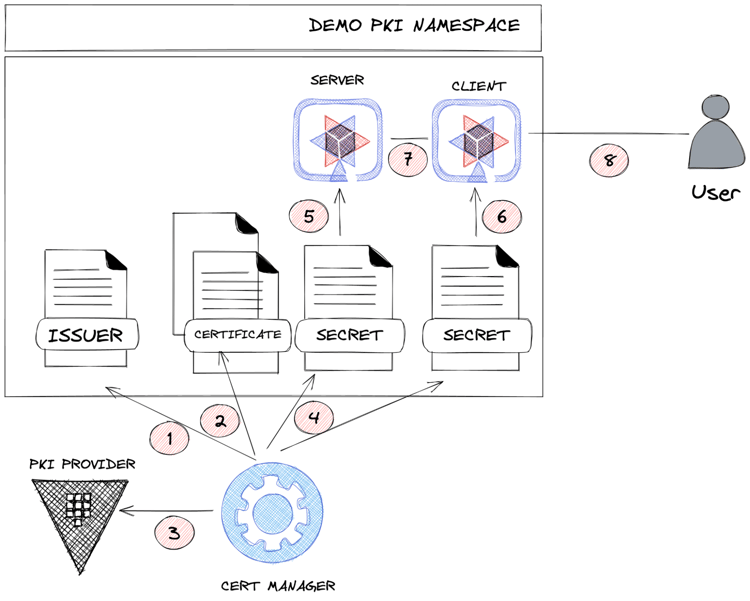 As we can see in the above diagram, there are several steps to request certificates from Hashicorp Vault that can be consumed by applications.

As we can observe in the code sample above, authentication is performed using namespace default service account, which is specified as secretRef in the issuer authentication section. 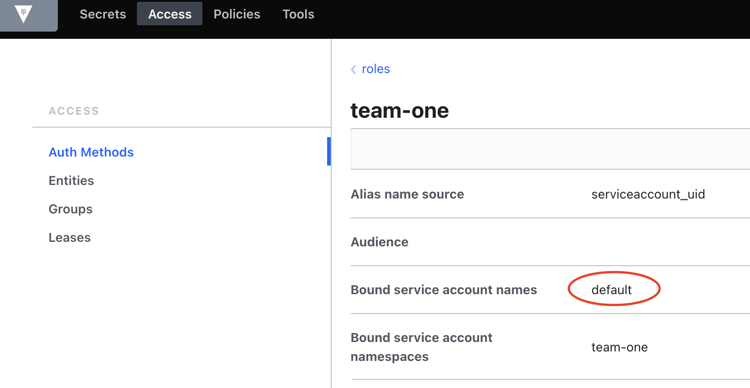 We have developed a demo Java application which you can find in the following repository:

Since the Issuer is already created, we can deploy the full example performing next steps:

Now, what is happening, behind the scenes, during the application deployment.

In the Vault UI → Secrets → app-pki/team-one you will find the two certificates recently created by the deployment.

The sample code is based on Quarkus, we define ssl configuration in the client application.properties file as follow:

As well, in server application.properties file:

In both files the ssl.native is set to true, keystore and truststore is defined and client-auth field is set to required.

For more information see the blog, Quarkus Mutual TLS, to explore in detail how SSL and Mutual TLS works in Quarkus.

In this article, we walked through an effective and automated approach to manage the lifecycle of application certificates in a Kubernetes environment. This was accomplished by building a certificate authority (CA) in Vault, creating the CA chain hierarchy with an offline root CA and online intermediate CAs.

We also explored cert-manager, the de facto cloud-native solution for certificate issuance and renewal. Cert-manager interacts with HashiCorp Vault, an identity management system. We then introduced how Vault can be installed in a HA manner using integrated storage and leverage SSL certificates issued by cert-manager. We also described the integration of HashiCorp Vault with Kubernetes Authentication method and service account to manage access to resources within Vault.

The configuration of Vault is defined as a declarative process which is then leveraged by the Vault Config Operator. The X.509 certificates are provided by Vault’s PKI engine, using roles and policies. The cert-manager issuer will connect to the specific PKI engine and request an application certificate.

Last but not least, to understand the user and developer experience, we introduced a demo application that makes use of the full integration involving all the players in the game. Ultimately, the end user can request a certificate through cert-manager and HashiCorp Vault. Certificate secrets are available at Openshift namespace and can be mounted by any application to enable end to end security via trusted chain.