At Red Hat Consulting we help customers to adopt Red Hat products and technologies and make the most out of them. We believe addressing customer business needs is the best way to increase customer's ROI.

Based on that premise, at Red Hat Consulting we have different consulting offerings such as the Automation Adoption Journey or the Open Innovation Labs Residency that focus on outcomes and not outputs, aligning the technical solution with the customer business needs.

We rely on practices from the Agile world, Devops, Product Development or Domain Driven Design, all of them curated in the Open Practice Library, to achieve the desired outcomes.

In this article we are going to explain how to build Ansible automation execution environments (EEs) automatically, based on different practices such as everything as code and continuous integration on top of OpenShift.

Automation execution environments are container images on which all automation in Red Hat® Ansible® Automation Platform is run.

They provide a defined, consistent, and portable environment for executing automation, and allow for easier administration of Ansible Automation Platform by the platform administrator.

The best way to build EEs is relying on a new tool provided by Red Hat® Ansible® Automation Platform, the ansible-builder cli. In order to automate the build of EEs, we make use of OpenShift Pipelines as well.

In this article we will be working with two code repositories:

The idea is that every time we make a change to the Ansible EE repo, this will trigger the OpenShift Pipeline to build and push the EE to our registry, in this case quay.io.

We need to clone the OpenShift Pipelines manifests repo and apply them to the OpenShift cluster. But first we need to create the secrets to pull & push images to the registries and the GitHub webhook secret.

NOTE: As this example is consuming images from registry.redhat.io and pushing to quay.io, I recommend you use your Red Hat pull secret. You can get it from console.redhat.com.

For the sake of security, the secrets are not included in the repo, we need to create them manually.

Then create the pull & push secret. Replace the secret data with your registry credentials!.

The ansible-builder Tekton task has been contributed upstream and can be found in Tekton Hub.

Apply it to the cluster in the ansible-ees namespace.

Now we can clone the Pipeline manifests repo and apply them to the cluster.

NOTE: Remember the parameter TAG is extracted from the webhook payload, so don't need to touch it.

This will create the following manifests in the ansible-ees namespace.

Basically we have created the Tekton Pipeline and the Trigger & EventListener objects to be able to trigger the Pipeline on certain events, usually webhooks.

We can visually check the Pipeline details in the OpenShift console.

Got to the EE code repository and fork it, so then you can change the repository webhook settings.

As we want to automate the whole process, we are relying on the Trigger & Listener capabilities of OpenShift Pipelines. Every time we commit something to the forked EE repo in GitHub, this will trigger a webhook that will call the EventListener and trigger the Pipeline with the right parameters, some of them extracted from the webhook payload.

Now go to your recently forked repo in Github, to Settings -> Webhooks -> Add webhook and create a new webook. 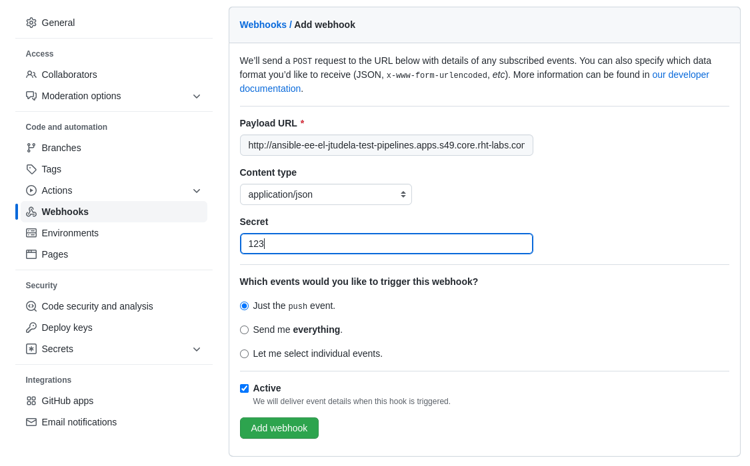 Now we just need to make a commit to the forked EE code repo and see how the pipeline is being triggered ;).

Triggering the Pipeline on every commit

We can easily simulate a change in the code by committing a empty change to your forked repo:

This will trigger the Pipeline and as result produce a PipelineRun object, which is an instance of a Pipeline properly parametrized with all the input parameters required. 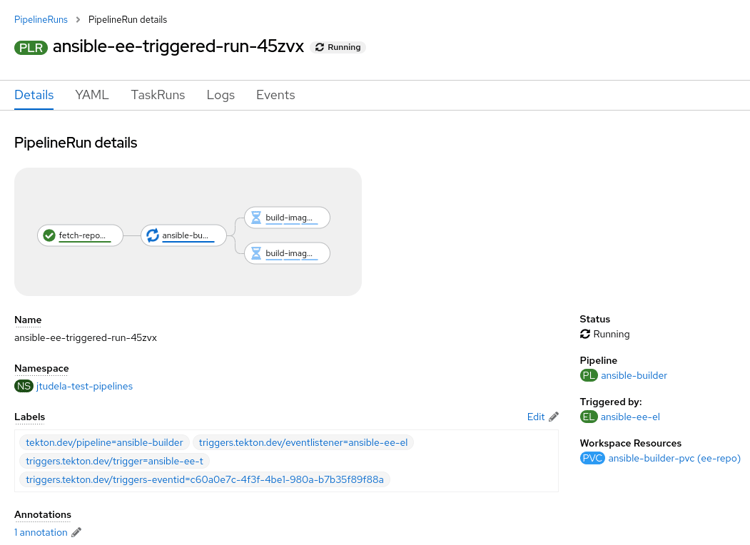 Some of those parameters are gathered from the Github webhook payload. You can inspect the TriggerBinding and the Trigger objects for more details.

We can see that the commit id 4242b3f matches the tag of the image built and pushed to https://quay.io/repository/jtudelag/ansible-ee-test:4242b3f. 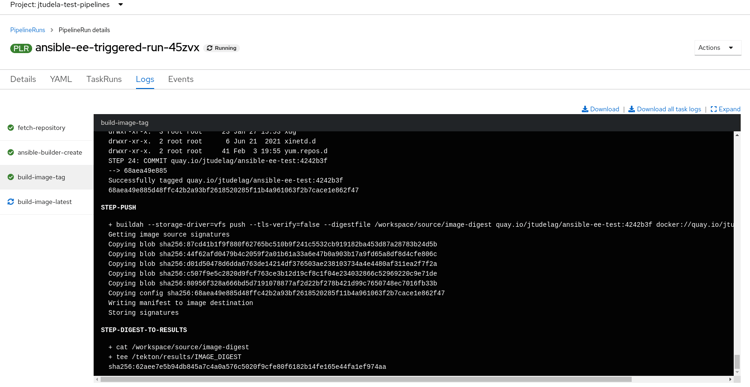 We can also see that the latest tag has been updated as well in quay.io.

Finally we can go to the Openshift console and verify the PipelineRun has succeeded, meaning all the tasks of the Pipeline finished ok! 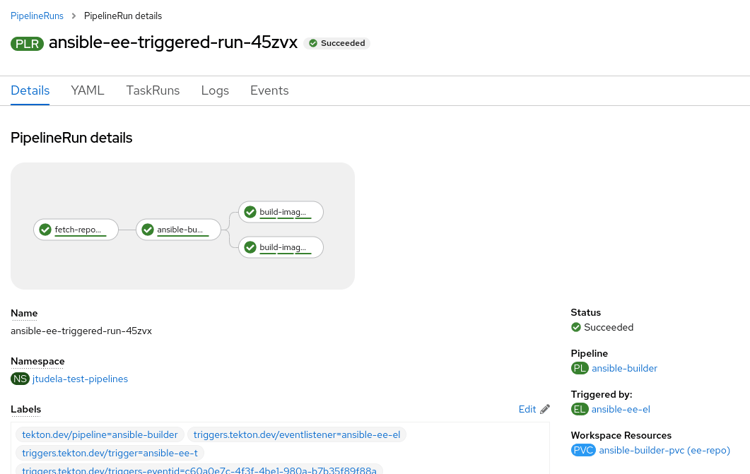 In this article we have demonstrated how Red Hat Consulting can help you make the most out of Red Hat products like Red Hat® Ansible® Automation Platform and Red Hat® OpenShift® to achieve your business outcomes leveraging on the curated set of Open Practices.

Ask an expert! Need help to get it done faster together? Contact hello-labs-emea@redhat.com.