This post was co-authored by Hemant Bhanawat, Director of Engineering at Yugabyte

YugabyteDB is an open source distributed SQL database exposing the PostgreSQL API. It is compatible with PostgreSQL, so you should be able to connect any application that was previously developed to work with PostgreSQL.

YugabyteDB uses replicas for high availability and supports synchronization through the use of the Raft protocol. Additional features include partitions (called tablets) for scalability, and in case of a cross tablet transaction, the two-phase commit protocol is also implemented

YugabyteDB automatically partitions SQL tables into tablets without user intervention. It also automatically distributes tablet replicas to the configured failure domains ensuring, as much as possible, no data loss. This behavior can be influenced by the user by configuring the failure domains, replication factor, and database affinity to failure domains.

A YugabyteDB deployment consists of two components: the tablet server, which is the actual distributed database, and the master, which contains the database metadata (SQL databases, SQL tables, tablets definition, and their location in the various tablet server instances).

Separating the metadata from the data is a choice that some other distributed stateful workloads make. For example, Kafka stores metadata in ZooKeeper, and work is underway to move the metadata into special brokers called controllers. Separating the metadata makes sense given that it is generally much smaller in size and can be managed differently than the data itself. However, by doing so, it complicates the overall architecture. In particular, one must make sure that instances of the metadata server are properly distributed across the failure domain so as to not lose the entire database in the event of failure.

From an architectural standpoint, the design for a geographically distributed YugabyteDB instance does not differ from the designs used in the previous installments of this series (part 2 and part 4). The following is a diagram depicting this architecture: 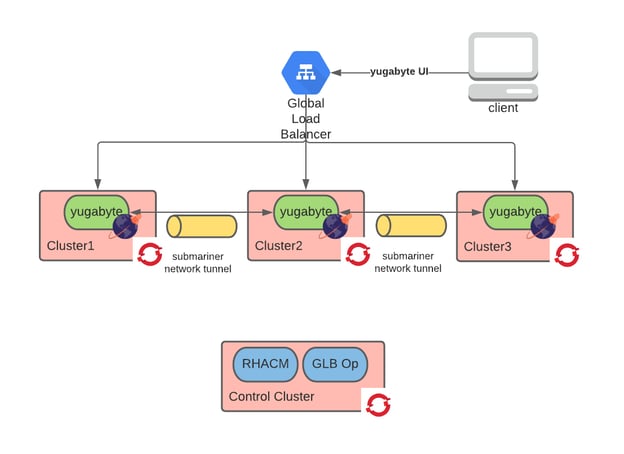 Starting from the top, we have a global load balancer directing connections to the YugabyteDB UI. Then, there are three OpenShift clusters with YugabyteDB instances deployed to each cluster. These instances can communicate with each other via a network tunnel implemented with Submariner.

Each cluster is in a different region of a public cloud provider.

Zooming in on the YugabyteDB deployment, we have three tablet servers and a master (metadata server) in each cluster. Together, they form a logical YugabyteDB instance. 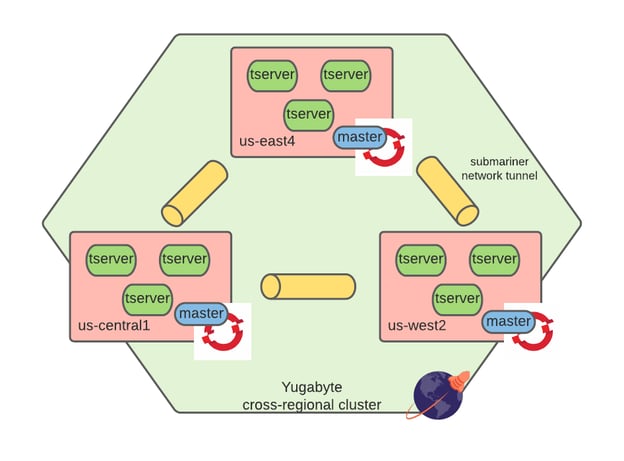 Step-by-step deployment instructuctions can be found at this repository.

We wanted to run the TPC-C standard OLTP benchmark to test both the performance and stability of the previously described deployment of YugabyteDB.

We executed this test in Google Cloud with the following configurations:

We ran the TPC-C 1000 test with one client in each region for one hour; these were the results:

Because of the way the tests are executed, the average efficiency must be taken as the final results of the test: 96.58. Efficiency is a metric derived from TPM-C (transactions per minute) and illustrates how close the tested database gets to the theoretical upper bound of transactions per minute given by the size of the test (the reason why there is an upper bound to the transaction per minute is that TPC-C incorporates thinking time for the emulated users).

This result is a pass, and it shows that this kind of deployment is usable in a production scenario.

As usual, we wanted to also test how YugabyteDB behaved in a disaster situation. To do so, we isolated the network of one of the regions by preventing any inbound or outbound traffic while the TPC-C test was running: 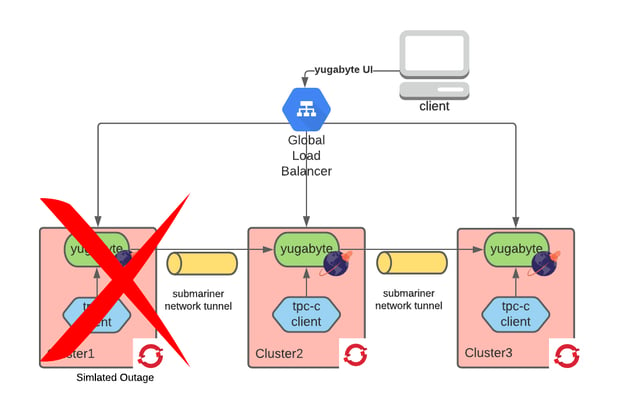 When we simulated the disaster, we observed a few errors in the surviving TPC-C clients; essentially, some in-flight transactions were rejected or failed to complete. We also noticed that YugabyteDB moved all of the tablet leaders to the healthy instances.

The system managed the disaster situation without the need for any human intervention.

When we restored connectivity to the isolated region, we did not notice any issues within the ongoing TPC-C clients. We also observed how YugabyteDB started rebalancing the database by moving the tablet leaders back to the newly available tablet servers.

Again, no human intervention was needed.

In this article, we described how to deploy YugabyteDB in a geographically distributed fashion. We saw that, notwithstanding the inter-region latencies, a deployment of this kind can satisfy the TPC-C test, and therefore, could be potentially used for some real case scenarios. We also observed how, when a disaster occurs (in our case, the loss of a region), the database reacts autonomously, reorganizing itself and guaranteeing zero data loss and very short unavailability (measured in seconds).