Design Considerations at the Edge of the ServiceMesh

In our experience of implementing Red Hat ServiceMesh, we found that the mesh behaves like a special zone within an enterprise network. Inside of it, configurations are clear and strictly enforced. We have no control on what is outside of it, and we should assume that there can be anything.

With proper training and education, you can quickly master how to configure traffic policies inside the service mesh using the standard Istio API, and apply them via CI/CD pipelines and/or GitOps workflow.

In this article, we present a set of design patterns around inbound and outbound traffic to and from the mesh.

To better understand the next paragraphs, it’s useful to recall how traffic routing decisions are made in Istio (the model that we are about to present works well for HTTP traffic). Consider the following diagram:

Moving from the left to the right:

For inbound traffic, it’s generally a good practice to drive traffic through one or more ingress gateways before letting it hit the services.

When designing how to deploy the ingress gateways of a service mesh, two main considerations are needed:

One ingress gateway per mesh (OpenShift ServiceMesh supports multiple service meshes deployed in a single OpenShift instance) should be enough in most cases.

However, you might have scenarios in which additional gateways are needed. Scenarios include when two radically different configurations need to be supported or when two kinds of traffic need to be kept physically separated (here is an example of this configuration). Another instance when you might have more than one ingress gateway is when ingress gateways need to be owned by individual tenants within their namespace.

The last configuration setup is not currently supported by the OpenShift Service Mesh operator and requires manual setup by tenants.

The other important decision is whether to expose the ingress gateway mediated by an OpenShift router or directly exposed to external traffic via LoadBalancer service.

The former scenario is more appropriate when the traffic is HTTP(s) or SNI+TLS, as this is the type of traffic supported by the router and when the added latency is not an issue. The Service Mesh control plane can be configured to create automatically routes (ior_enabled: true) consistently with the Gateway objects that are being defined.

The latter scenario is more appropriate in situations where the traffic is of a type not supported natively by the router or it’s important to have good latency performance. In these scenarios, the mesh administrator needs to configure the LoadBalancer service along with the proper DNS records. DNS records creation can be automated with the aid of the externalDNS operator (here is an example).

The above considerations help to design the shape of our ingress traffic, but we might also want to enforce that the ingress pathways we have created are the only form of allowable traffic. NetworkPolicy is the right tool for the job at hand (a good, but not 100% accurate, mental model is to think of NetworkPolicies as ways to enforce traffic rules at layer 4 and Istio configurations as ways of enforcing traffic rules at layer 7). The service mesh control plane already deploys a set of network policies that allows traffic only from the mesh or from the default router. We need to ensure that traffic comes only from the mesh for the tenant namespaces. There does not seem to be a way to configure the service mesh control plane to disallow traffic from the router (RFE).

We can still enforce that traffic only originates from the Service Mesh by removing the permission to create routes via RBAC. We will also need to make sure that tenants cannot change the created network policies (again via RBAC).

When configuring these enforcing rules, also keep in mind that in Openshift Service Mesh, tenants in a service mesh namespace still need to opt-in to the Istio sidecar being injected. Without the injected sidecar, a pod is essentially out of the mesh and therefore not subject to the policies enforced by it. Kubernetes-level policies can still be configured (for example, via Open Policy Agent) to enforce that all pods be part of the mesh.

For egress traffic, we, again, have to decide how many egress gateways we need. In some cases, the answer could be zero. However, in most cases, having one egress gateway will be useful:

Outbound traffic from a pod in the mesh always traverses through the envoy gateway, so there is a level of control on that traffic, even if it doesn’t flow through an egress gateway. However, egress gateways can be used to achieve the following:

Additionally, Istio can be configured to forbid the routing of addresses unknown to the mesh. Normally, if an application attempts to open a connection to an address that is unknown to the mesh, Istio would use DNS to resolve the address and execute the request. With the global.outboundTrafficPolicy mode option set to REGISTRY_ONLY, we can configure Istio to only allow connections to known addresses (that is, addresses for which a VirtualService is defined).

Istio can verify the validity of an OAuth token as part of its end-user authorization policy. However, it cannot handle an OIDC authentication workflow for requests that do not carry an OAuth token.

Istio assumes the initial authentication (where the token is created) will be facilitated outside of the mesh, but clearly the two use cases (authentication flow and token validation) are closely related.

In fact, for many applications, the expected behavior is that when a token is not available, the user should be redirected to the authentication flow.

One way to handle this use case is to add an OAuth-proxy capable of handling the authentication workflow in front of the ingress gateway. This container could even be deployed as a sidecar as depicted in the following diagram: An example of this scenario in practice can be found here.

You could add more gateways to this service mesh deployment in case you need to handle unauthenticated traffic or traffic using a different authentication method.

Once the token is created via the authentication workflow, you can configure the ingress gateway to verify it. Additionally, you can configure all of the services in the mesh to re-verify the token, increasing your security. In order for this to work, your services need to forward the token at every step.

Ingress and egress gateways can be useful to configure how TLS connections should be handled between different PKI trust domains. Istio manages its own PKI by default with an internal trust domain and it is safe to assume that outside of the mesh there are other trust domains.

The following is a diagram capturing this scenario: In the diagram above, we can see that the application consuming the service within the service mesh is in the trust domain A. In this case, mTLS has been configured between the consumer and the ingress gateway (here are instructions on how this is accomplished). Then, the application makes an outbound call to an external service, which belongs to trust domain B. mTLS is configured by deploying the correct certificates on the egress gateway (here are instructions on this portion).

By managing the certificates at the gateway level, we achieve the following:

Naturally, we could have set up a normal TLS deployment by deploying CA bundles instead of client certs, this decision does not impact the service mesh tenants.

These kinds of setups are highly simplified if there is a mechanism to automatically provision certificates. The Cert-manager operator is an ideal option in this space.

Detailed instructions on how to setup TLS/mTLS for gateways can be found here and here.

In certain scenarios, it might be necessary to rate limit the outbound traffic from the mesh. These types of traffic controls are useful when an upstream service may have imposed limits based on pricing tier, or legacy systems that may only be able to handle a certain amount of requests or concurrent connections over a period of time.

Furthermore, different SLAs might be applied for traffic originating from different sources and creating a need to rate limit these traffic types in different ways.

Destination rules and traffic policies can be used in conjunction with circuit breakers to manage how inbound requests of different SLAs can be prioritized when propagating out of the mesh. In the above diagram, we demonstrate how two different inbound requests that are assigned different SLA classes (one such way can be assigning a header) can be used to apply different destination rules and corresponding traffic policies (here is an example). These methods can be used to maintain a healthy upstream system and allow for the services in the mesh to continue functioning or apply circuit breakers patterns when the limits are reached.

Besides the use cases that were described in this article, there seems to be significant work being done “at the edge of the mesh” in the larger service mesh ecosystem.

The ability to extend the mesh beyond one Kubernetes cluster or to external endpoints will likely use some level of gateway federation. For example, Istio supports federating meshes in this fashion, and a recent release of Hashicorp Consul mesh also gained this level of support via the introduction of WAN mesh gateways.

Also, the ability to federate meshes from different vendors will likely make use of the concept of gateways. Mesh-hub from solo.io is a project that is experimenting in this space.

Finally, with the introduction of the ability to plugin new capabilities to the envoy proxy via the use of WASM proxy packages, we believe that we are going to see more and more features being deployed at the edge of the meshes in gateways.

For example, most of the capabilities deployed in a DMZ, such as IDS/IPS, WAF, DDoS mitigation systems, feeding access events to a SIEM, user authentication systems (we have seen the OIDC authentication example, but other mechanisms could be supported in the future), could simply become additional envoy filters. This could reduce the need for having DMZs and potentially even completely eliminate them. 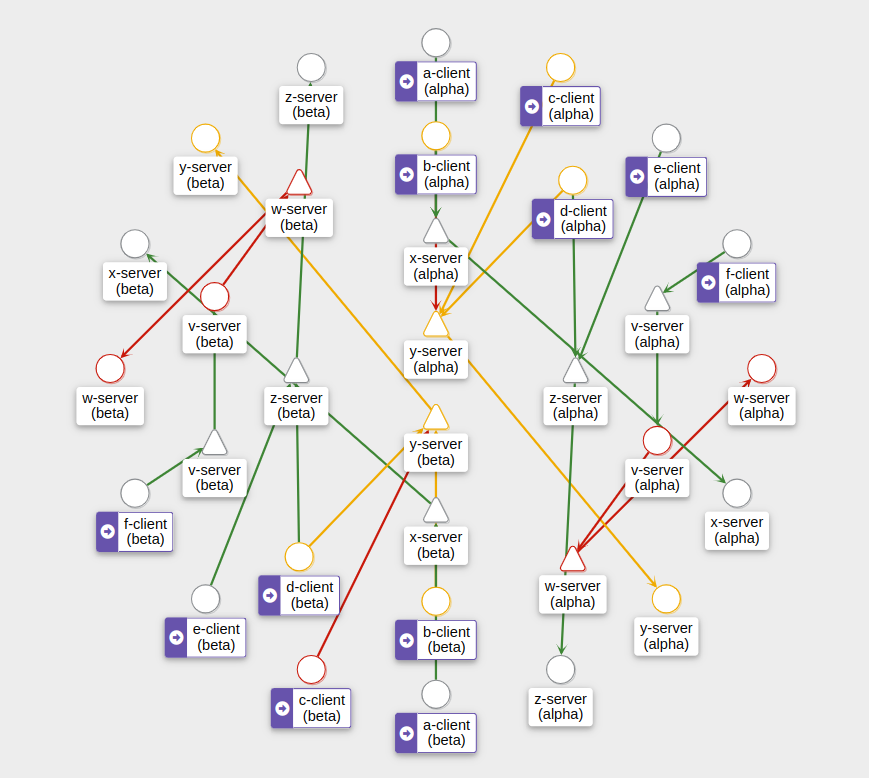