A Guide to Ingress Controllers in OpenShift using IPI

In this blog, I will cover how Ingress Controllers can be used to enable public access to OpenShift private clusters that have been deployed using the Installer Provisioned Infrastructure (IPI) method. Check out the previous blog for more info on the Ingress Controller.

Now that we better understand how the traffic gets into the cluster, in the case of a private setup, we can simply create another ingress controller specifically for external traffic. If we are successful, the overall diagram will look like this:

The sequence to do this is the following:

In this blog, I have used Route53 from AWS to host a special wildcard-enabled domain called *.apps.simon-public.melbourneopenshift.com. Notice that it is completely different from the ipi-private.privatesimon.com domain used for creating the OCP cluster in the first place.

For the new ingress-controller, we will call it Ingress-External as per the yaml file below:

There are three important components in the file above:

Here is a screen capture from the AWS console showing the load-balancer that has been created. Notice how the ports match the ports from the router-ingress-external service:

Now that all the “plumbing” is working, we need to point the DNS entry to the domain we want to route (apps.simon-public.melbourneopenshift.com) to the load-balancer that has just been created.

I am using Route53. You can see here the details for doing this step, but from the screen capture  below, you can see that the hosted zone points to the right load-balancer:

To expose the application to the outside world, we now need to make sure that we can create a route that is exposed via the external-ingress controller.

You can now check the routes associated with the application: 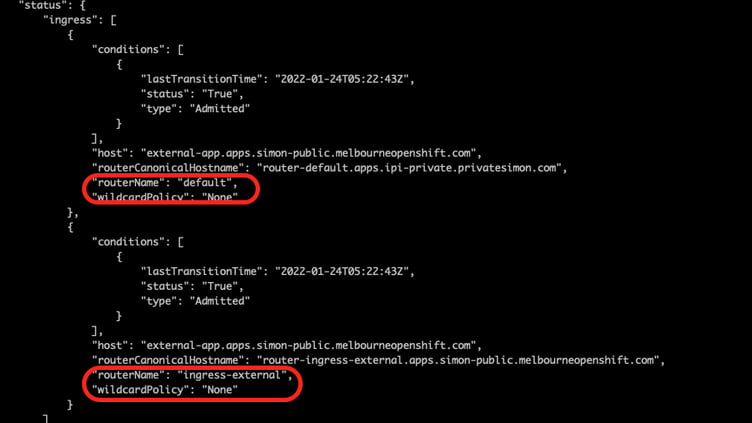 To make sure that the routes of *.apps.simon-public.melbourneopenshift.com are only exposed by one router (the external-ingress router), a routeSelector must be defined into the ingresscontroller “default” in the namespace of openshift-ingress-operator.

You can do this by entering:

and add the following:

And there you go. As you can see in the screen capture, the django-ex-external route is now associated with the external ingress controller exposing our application on our private cluster to the world. Pretty neat:

All right, for the final step of this blog, we can now browse through to the app from anywhere.

Open your favorite web browser and paste the URL (in my case, http://external-app.apps.simon-public.melbourneopenshift.com/), and this is what you see:

Or you could also simply curl the application:

In this blog, we have looked at how Ingress Controllers can be used to expose applications to the external world for private OpenShift deployments.

For those of you who are interested in trying it for yourself, I am putting a link here that will have all the resources used in this blog. Please give it a try, and if you have improvements, comments, or feedback, open a pull request or just reach out.