Operator Metering is a chargeback and reporting tool to provide accountability for how resources are used across a Kubernetes cluster. Cluster admins can schedule reports based on historical usage data by Pod, Namespace, and Cluster wide.

There are many out-of-the-box report queries that are made available when you install the metering operator. For example, if an admin wants to measure the CPU (or memory) usage for the cluster nodes (or pods), then all you need to do is install the metering operator and write a Report custom resource to produce a report (monthly, hourly, and others).

There are a few requirements I’m hearing consistently from customers.

How Does Metering work?

Let’s decode a bit on how OpenShift Metering works before we move on to creating new custom resources for our use case as mentioned in the previous section. There are a total of six  custom resources that the metering operator creates once it is installed. Out of six, the following need a bit more explanation.

There are many out-of-the-box rds and rq available. Since we are focusing on node level metering, I will  show which ones we would need to understand to write our own customized queries. Run the following command while in “openshift-metering” project:

You could observe the Prometheus query used to fetch data from Prometheus and store it in Presto tables. Let’s run the same query in the OpenShift’s metric console and see the result. I have an OpenShift cluster with 2 worker nodes (each node being 16 cores) and 3 master nodes (each being 8 cores). The last column, “value”, records the cores assigned to the nodes.

So, the data gets collected and stored in the Presto tables. Let’s now focus on a couple of reportquery (rq) custom resources:

We are keen to focus on “node-cpu-capacity” and “node-cpu-capacity-raw” rqs here. You could describe these reportqueries and figure out that they are computing data (as in how long the node is up, how many CPUs are assigned, and so forth) and aggregating data.

In fact, the below diagram shows the chain on how the two rds and the two rqs are connected.

Let’s focus on writing our customized rds and rq. First, we need to change the Prometheus query to include whether the node is functioning as a master/worker node and then include an appropriate node label that would identify which team the node belongs to. “kube_node_role” Prometheus metric has data wrt nodel role (as a master or worker). See the “role” column: 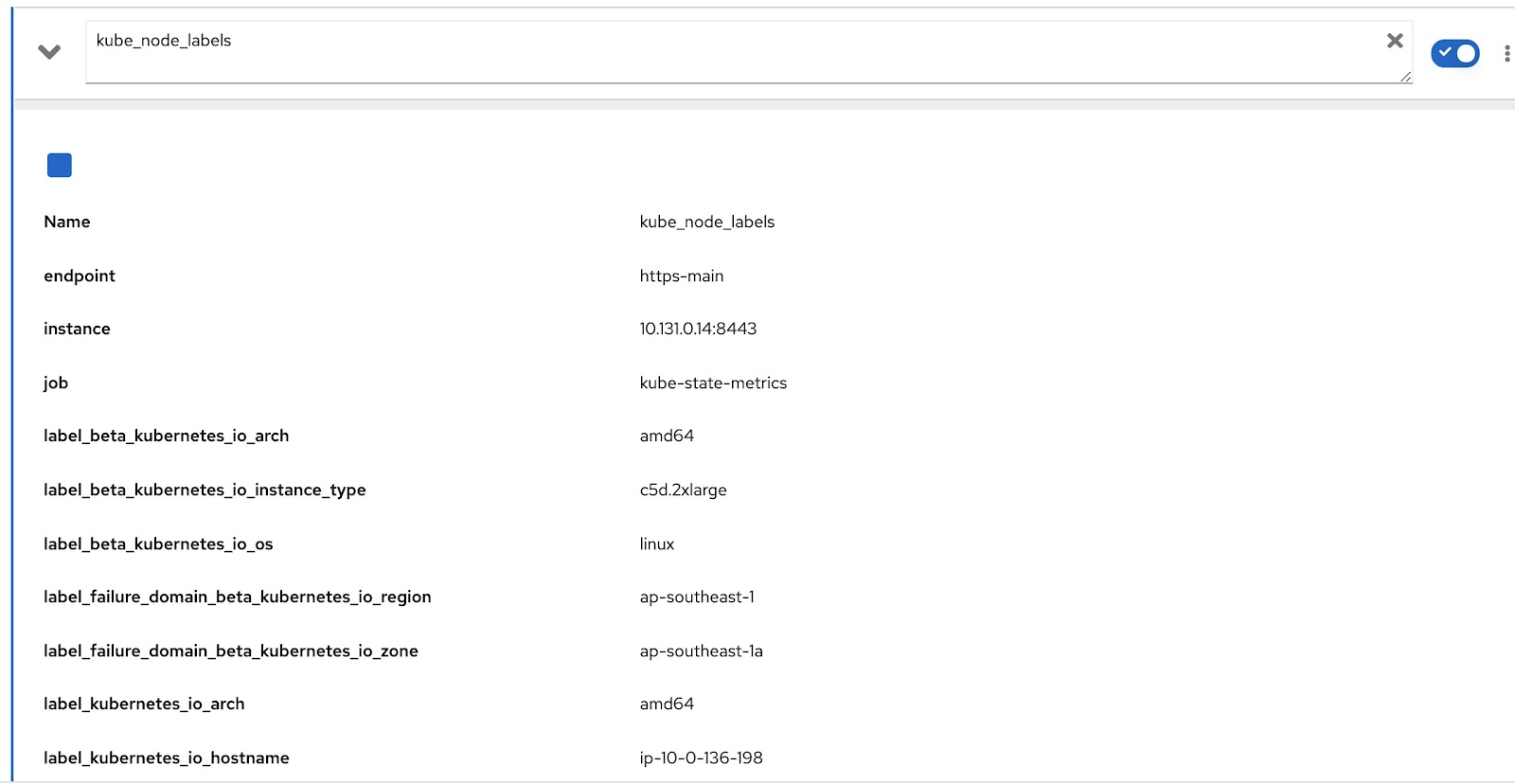 Now, all we need to do is to modify the original query with these additional couple of Prometheus queries to get relevant data. Here’s what this query looks like:

Let’s run this query on OpenShift’s metric console and verify we got both the label (node_lob) and role information. Below, we have label_node_lob as an output as well as role (you can’t see role information as the query outputs lots of columns, but it does capture): 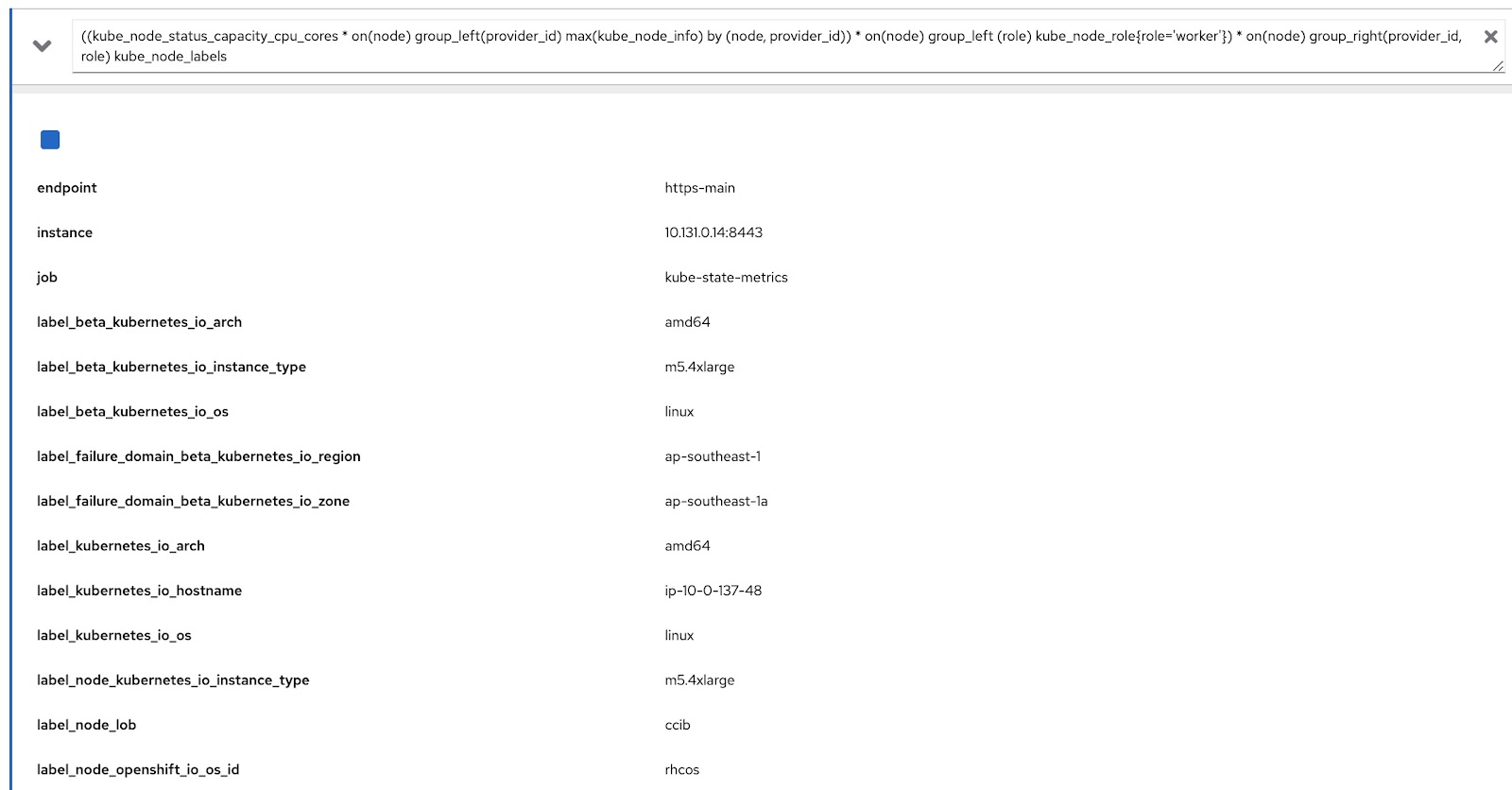 Once you have written these yaml files, go to openshift-metering project and run the following commands:

Finally, all you need to do now is write a Report custom object that would refer to the last rq object created above. You could write one as shown below. The below report will run immediately and show data between September 15 to 30.

Once you run this report, you could download the file (in csv or json) via this URL (change the DOMAIN NAME accordingly):

The  metering operator is pretty cool and can run on OpenShift clusters wherever it is running. It provides an extensible framework so that customers can write their own custom resources to create reports as per their needs. All the code used above is available here.