This article shows how OpenShift Pipelines, based on the Tekton open source project, can be used to automate the execution of Red Hat Advanced Cluster Security for Kubernetes as part of a wider continuous integration solution. The objective is to bring into the continuous integration process the validation of Kubernetes resources such that any violations against defined policy can be addressed earlier in the development life cycle.

Red Hat Advanced Cluster Security for Kubernetes (RHACS) is based on the products of StackRox which was acquired by Red Hat in 2021. RHACS provides a comprehensive solution for the following areas:

RHACS is able to analyze application deployment files in yaml format against the policies held within the product. This enables teams to “shift left” the analysis activity and ensure that it is performed at the build phase of the CI process. Teams can define the policies to identify the container image issues or resource misconfigurations that they wish to ensure do not make it past the development stage. There are many advantages to this approach. The “shift left” strategy ensures that defects are removed close to when they are introduced and are therefore fresh in the minds of the developer. There is also a cost benefit to fixing defects early in the development cycle. If the phase of creating Kubernetes resources is aligned to the code development phase, then a study by IBM shows that fixing the issue in the development test phase costs around 4 times as much as fixing it at the code development stage. The costs escalate further to 7 times the development cost if found in acceptance testing and up to 100 times the cost if found in operational use. Of course, there are also the tangible and intangible costs associated with a potential data leak due to regulatory fines and reputational damage. Clearly, assessing the quality of the image supply chain and the assets used to configure an application on a Kubernetes platform is critical. The earlier this is done in the software development process and the more integrated that process becomes with the day-to-day continuous integration processes the better.

Red Hat Advanced Cluster Security for Kubernetes has a command line interface (roxctl) for the evaluation of images and resources against policy definitions held on the RHACS server. The command line interface may be downloaded from the RHACS web user interface for ad-hoc use, and in the automation steps presented here, roxctl is downloaded from the RHACS server during each execution of the analysis. This ensures that the correct version matching the server is always used.

The roxctl command line interface has a number of options for resource and image analysis. Of particular interest in this blog is the “deployment” option, which traditionally is used to check for deployment readiness of Kubernetes resources. By using this option during the build phase of development, teams can get a much earlier indication of deployment issues rather than waiting until deployment time. This enables teams to fix the problems during development, which will lower costs and lead to smoother deployments.

The assets described below are available in the public GitHub repository here. The relevant files are in the directory ci/OpenShift-Pipelines. EIther clone or fork the GitHub repository to get access to the files, or simply browse to the location and view the files.

The CI process used in the example below takes advantage of the tasks and skeleton pipeline and pipeline run resources that users can build into their own wider OpenShift Pipelines process. The resources and their interaction are shown in figure 1: The process shown in figure 1 is explained in detail in the following sections.

The OpenShift Pipelines “pipeline run” resource calls the pipeline resource passing with it the parameters that are required. Some of the parameters are highlighted in figure 1 above, and all are described in the table below.

The pipeline run defines a workspace on a 10 Mb persistent volume claim called “files” to which the source assets are cloned and the results files are written.

If you wish to add the tasks described here to an existing OpenShift Pipelines process, then add the parameter definitions and the workspace volume to your existing pipeline run.

The OpenShift Pipelines “pipeline” resource in the above-mentioned GitHub repository orchestrates the execution of the tasks and the passing of parameters between tasks. Further information on the use of the pipeline is given in the section “Making a decision based on scan result.”

The OpenShift Pipelines cluster task called “git-clone” is used to clone the resources under investigation. The cluster task requires the parameters “url” and “revision” to be supplied, with other parameters described in the task documentation being optional. The task also requires a workspace called “output” onto which the content will be cloned. The workspace called “files” created by the pipeline run resource is passed to the task under the name “output.”

The task called “resource-deployment-check” has one step that performs the roxctl analysis of the resources under investigation. A result file is created for each file analyzed which has the same name as the file under test with the addition of the extension .scan-result. The content of this file is the roxctl json format output, which is described below in an abbreviated manner:

In the above example alert 0 has an enforcement action to fail the build and alert 1 does not. More information is given on this area in the next section.

The script in the task first identifies and reports the number of alerts that have been raised against the file from the json object .alerts[]. For each alert the script then examines the value of the parameter .alerts[x].policy.enforcementActions[], to see whether the policy has an enforcement action of FAIL_BUILD_ENFORCEMENT. If there is such a parameter, then a flag is set to report that the overall result of the scan process is a ‘‘fail.”

The task has an output parameter called scan-result into which a value is written based on the overall result of the scans. The definition of this parameter is shown below:

The json output for the roxctl scans may include an enforcementAction as described above. This is set as a property on the policy as shown in the RHACS system policies in figure 2. The policy for “Fixable CVSS >= 7” is a build and deployment policy that is configured to fail builds during continuous integration.

The policy “Latest tag” is also a build time policy, but this will not fail builds during continuous integration processes as indicated in the policy editor section of RHACS shown in figure 3. This should  be considered to be a warning policy rather than a strict enforcement. Each organization can create and delete policies and set the enforcement behavior on each policy as required. Making a Decision Based on Scan Result

The pipeline example in the GitHub repository shows how the output of the scan result can be used to control further progression of the pipeline. If the scan assessment fails, then it is possible to stop subsequent tasks from being executed. This requires the use of the “when” clause of a pipeline task definition. Earlier implementations of Tekton offered “conditions” to control task progress, but that has now been deprecated in favor of the “when” clause.

A section of the pipeline example is shown below:

The “when” clause takes an input property with the format:

In the definition of the task called “resource-deployment-check,” the result file is constructed using the -n option on the echo command. This avoids the default behavior of the inclusion of a new line character that would cause the failure of the comparison in the “when” clause.

Example Use of CI Process

The process for getting access to the example files used in this article is described in the section “Access to pipeline assets" above. To create the scenario perform the following steps:

The URL that you put into the above command does not have http:// or https:// on the front of it.

It is also possible to see the consolidated log of progress using the command:

The above command will display something similar to that which is shown in figure 4:

Figure 4: Successful deployment because all files pass the RHACS validation.

Figure 5: Successful completion of all steps of the pipeline run.

At this point, the pipeline run has the settings:

Edit the file PipelineRun/acs-pipelineRun.yaml and switch the above value to true. This will cause three more files to be analyzed in a subdirectory, two of which have errors. Execute the pipeline run again using the command:

When the pipeline run completes, you will see a difference compared to the result shown previously. In figure 6, the green bar on the most recent deployment does not extend across the full extent of the task status section indicating that not all tasks have been completed. The pipeline run still has a status of Succeeded indicating that it has reached a successful conclusion in which it has elected not to run some of the tasks.

Figure 6: Partial completion of the pipeline.

The pipeline run details for the task ending ctgmt shows that the dummy deployment task has not been executed as indicated in figure 7. Looking closer at the detail of the tasks in the pipeline, and examining the output of the “resource-deployment-check” task shows that more files have been examined as shown in figure 8.

Figure 8: Deployment check information showing some clean files and some with violations.

The headers in square brackets from Tekton have been abbreviated and additional color and bold have been added to aid readability.

Figure 9: Output from the deployment check with violations.

The process shown in this article is a simple way to include the execution of the roxctl policy scanner for resources as part of a continuous integration process. This is a quick way to “shift left” the resource analysis and to bring good practices for writing application resources to the attention of developers. Highlighting and fixing issues earlier in the development process will reduce cost and rework and lead to more reliable and secure applications.

The content presented in this article is open for anyone to use and modify to suit their specific needs.

If you have specific requirements for what you would like this process to accomplish then please get in touch. 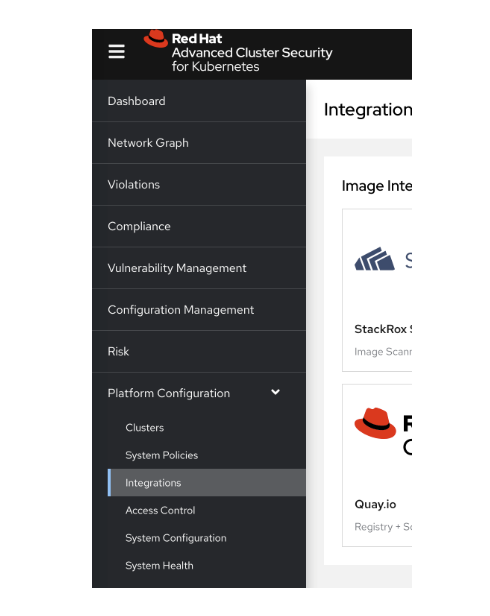