We are excited to announce that OpenShift sandboxed containers is now available on the OpenShift Container Platform as a technology preview feature.

It should come as no surprise that Red Hat has always invested in providing a layered approach to security with a Defense-in-Depth mindset, starting from the operating system (OS) layer with Red Hat Enterprise Linux CoreOS to the application and platform layers with OpenShift’s comprehensive DevSecOps strategy. Defense-in-Depth begins with assuming that exceptions do happen and can happen; as a result, various independent security measures are implemented to account for those exceptions at every layer of the stack. 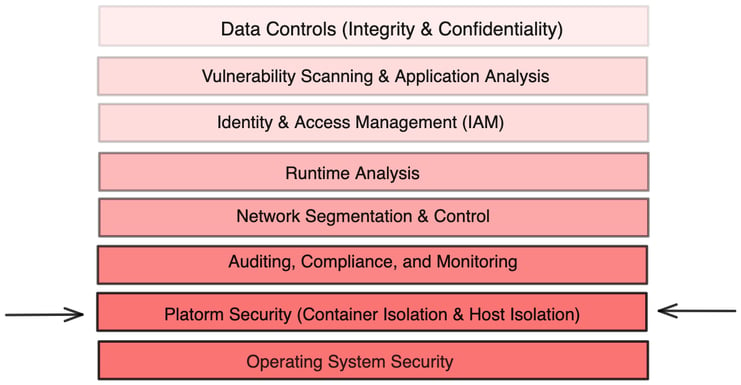 Why does it matter?

Are you a developer?

As a developer working on debugging an application using state-of-the-art tooling such as extended Berkley Packet Filters (eBPF), you might need elevated privileges such as CAP_ADMIN or CAP_BPF. Giving you this may make cluster administrators feel uneasy. After all, with power comes great responsibility. If for any reason your development environment is compromised (exceptions do happen), the attacker will be granted access to the entire host and every process running on it, could tap the system, or even load custom kernel modules.

With OpenShift sandboxed containers, any impact will be limited to a transient lightweight virtual machine with almost no software installed.

Are you a cluster administrator?

You are guarding the fortress. Using OpenShift’s layered approach to security, you have already done a great job getting your cluster to a secure state. However, sometimes exceptions do happen, tickets are opened, and you are required to run potentially vulnerable code. For example, legacy applications that have not been patched or maintained for some time might put the system at risk.

With OpenShift sandboxed containers, you can run such software in its own isolated kernel.

Are you a service provider?

As a service provider, you might be responsible for providing your service to multiple tenants. In an OpenShift or Kubernetes world, this could potentially mean that the service workloads are sharing the same worker node. An example would be operating a CI/CD pipeline; each job could be running its own build command, the output of each job might affect other jobs on the same node, in particular, if it needs to install software that requires elevated privileges.

With OpenShift sandboxed containers, you can safely install the software you need while only granting it access to a transient virtual machine that contains no other accessible software.

Another example would be if you are a Telco moving to adopt Network Function Virtualization (NFV). This requires going through a transformation phase to get all Network Functions (NF) to run as containerized Cloud-native Network Functions (CNFs). While you might already be halfway through, there will be exceptions where you might want to run NFs that were not designed to be cloud-native and would require additional privileges. Having privileges executed on a shared kernel might lead to privilege escalations especially if other security knobs are not properly configured. Additionally, those CNFs could be developed by a 3rd party or different vendors, which adds more requirements to establish isolation boundaries between those CNFs.

With OpenShift sandboxed containers, this additional software can also be installed only inside a transient lightweight virtual machine dedicated to it, limiting interaction with any other software.

What is OpenShift sandboxed containers really?

The OpenShift sandboxed containers Operator delivers and life-cycles all the required bits and pieces to make Kata Containers consumable as an optional runtime on the cluster. That includes but is not limited to: 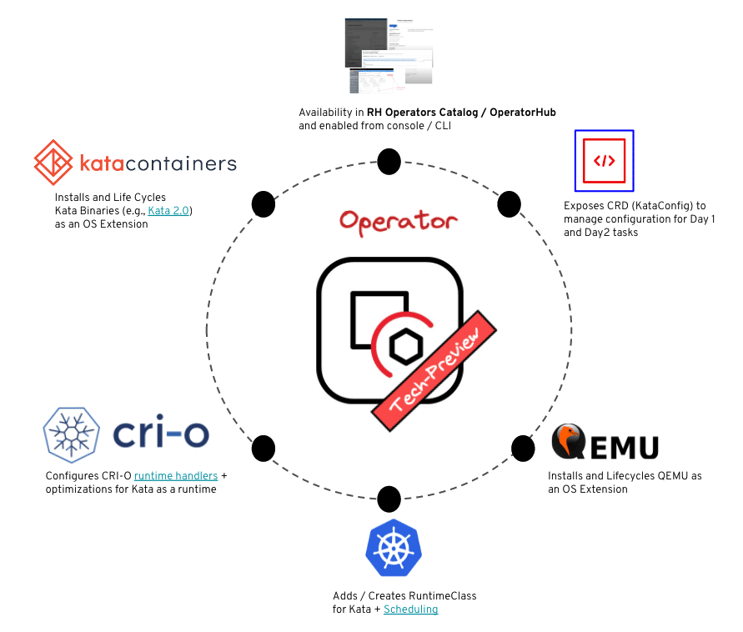 The end result is that all you need to use isolated containers is a one-line addition of the runtimeClassName field on a workload spec, and off you go running a kernel isolated application.

It is important to note that the Kata Containers runtime can not be used as the primary/default runtime. By design, Kata Containers does not allow host-level access. For example, access to host networking “hostNetwork” is not supported. This could mean Container Network Interface (CNI) plugins that require this privilege would not function properly; this also applies to any other workload that requires access to host networking.

Since all you need to do is specify a runtime class, sandboxed containers behave essentially like regular containers, except that they run in their isolated kernel. There are numerous advantages for adopting a Kubernetes-native User Experience (UX) to run sandboxed workloads including but not limited to:

With OpenShift sandboxed containers, we are NOT reinventing the wheel. We are adding another gear to help you move faster in addressing the diverse demands of your workloads!

How does it compare to OpenShift Virtualization?

Another distinction is how those two features are consumed post operators install. For OpenShift Virtualization, additional Customer Resources (CR) are used to configure and run a VM declaratively and a dedicated CLI tool is used to help customize the VM behavior (e.g., boot order, machine states, consoles, and so on). To run a workload with OpenShift sandboxed containers, OpenShift resources (e.g., Pods, Deployments, Statefulset, etc.) are re-used and configured to use the Kata Containers RuntimeClass; no CRs are introduced for running workloads.

In simple terms, OpenShift Virtualization tries to cater to the needs of VMs and provide a similar experience on Kubernetes. On the other hand, OpenShift sandboxed containers focus on additional isolation while being as close to a container as possible when it comes to performance.

OpenShift sandboxed containers are available now in OpenShift Container Platform 4.8 on bare-metal Red Hat CoreOS nodes. If you are a current OpenShift customer, you can access it as a part of your existing subscription. There is no additional cost or entitlement needed to begin using it now. OpenShift sandboxed containers is Tech Preview. We are hard at work to promote the feature to GA, which is targeted for the first half of the calendar year 2022.

In our future posts, we will go deeper into Kata Containers, the OpenShift sandboxed containers Operator machinery, and the concepts behind each.

Some resources you may find useful are here: