Let’s introduce you to some standout features added to the upcoming version of OpenShift. These features support a more seamless virtualization experience by providing an easier way to attach disks to virtual machines (VMs) while they are still running, import VM to OpenShift Virtualization, and more.

If you would like to add a disk to a running VM, hotplugged disks are your ticket. A disk is defined as "hotplugged" if it is attached to a VM while the VM is still running. Hotplugged disks are part of the VM and can be attached or removed as a VM runs, or after it restarts.

When you add a hotplugged disk to a VM, a specified badge surfaces next to their name so that you can easily distinguish them from other standard disks on your list. By default, hotplugged disks will stay attached to the VM after a restart. 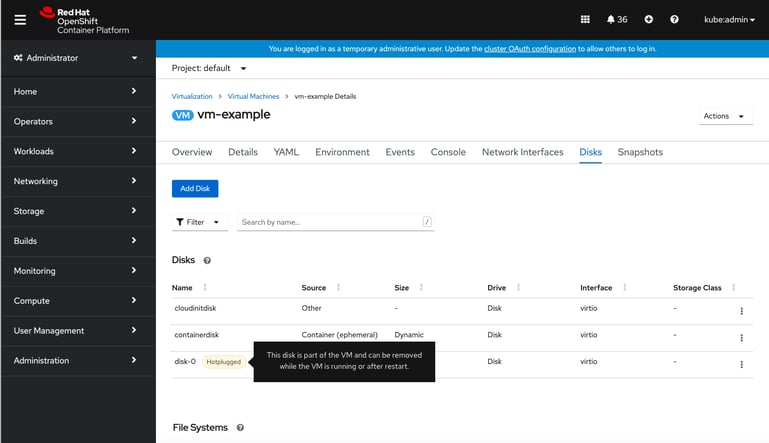 Hotplugged disks receive a Hotplugged badge next to their name. 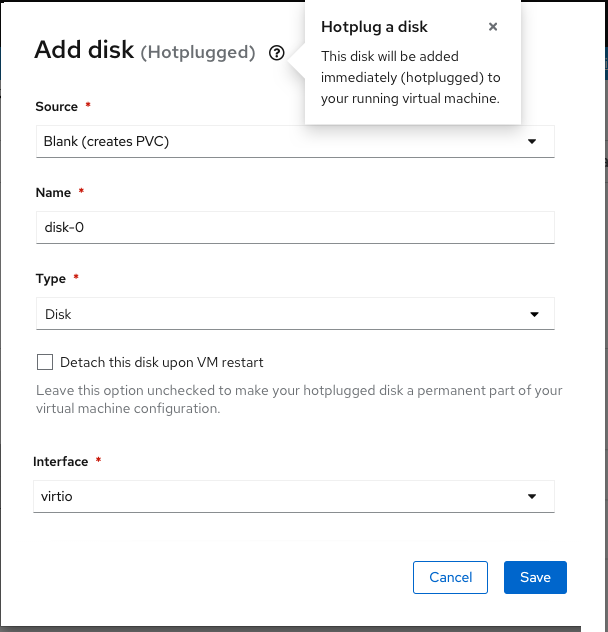 To add a hotplugged disk, open and fill out the Add disk modal.

When you add a hotplugged disk, you will decide if you would like your selected disk to remain a permanent part of your VM configuration or detach from your VM when it restarts.

A hotplugged disk is dynamic, so you can detach it while the VM is still running or after restart.

However, a regular disk cannot be added to a running VM.

Clicking the disk’s kebab menu will open the Edit disk modal, where you can select whether you would like your hotplugged disk to detach from your VM when it restarts.

For the upcoming 4.9 release, we will remove the import option from the Create dropdown menu and ask you to install MTV via the Operator Hub instead.

Once you click the Install Migration Tool button next to the Create dropdown, you willl open an installation modal for MTV. Then you will be directed to the MTV page, so if you decide to stick with the default settings, all you need to do is click Install. All the installation steps will be updated the way we have for all other operators.

Once the MTV is successfully installed, you can click the Launch Migration Tool button to open the MTV user interface in a new window. 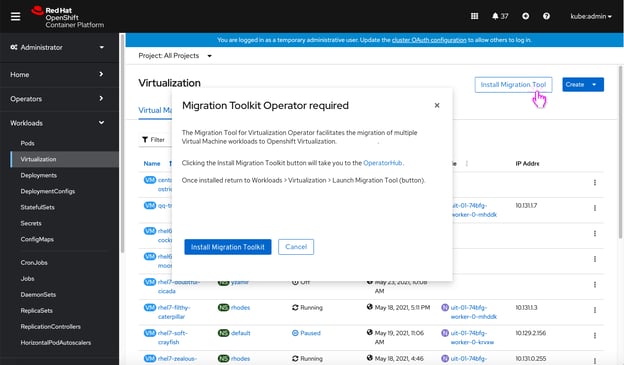 The Install Migration Tool action will now be located as an independent button next to the Create dropdown menu. Once MTV is installed, this button will launch the MTV UI and open it in a new window.

Sysprep is an automation tool for Windows that automates Windows installation, setup, and custom software provisioning.

The Sysprep section is now added to the Advanced section in the Create Virtual Machine wizard, so you will be able to upload the files and auto-install Windows VMs in one place. 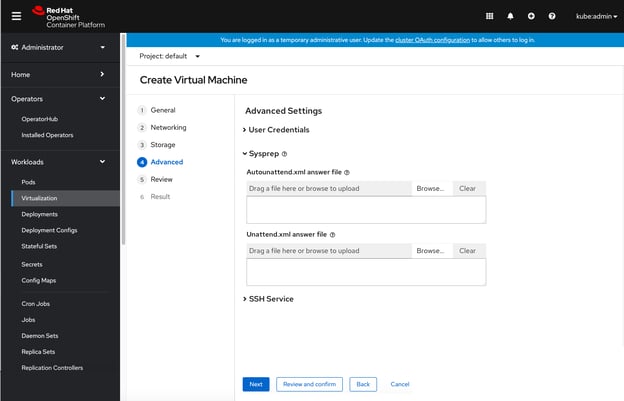 Sysprep appears in the Advanced section of the Create Virtual Machine wizard.

These new enhancements lead us to building better OpenShift Virtualization experiences and supporting users like you as you pursue more goals.

Help us shape the future of OpenShift Virtualization experiences

We challenge ourselves to continue to improve OpenShift Virtualization and are actively looking for ways to further enhance your experiences in future releases.

But for that, we need you. If you would like to participate in our user research or share your feedback with us, please reach out to uxdresearch@redhat.com.

To help us improve OpenShift experiences based on feedback from users just like you, sign up to participate in our future UX research efforts.

How to Add Virtual Machines to a Service Mesh

OpenShift Virtualization is already established as a great tool for lift and shift migrations. Developers can prioritize rewriting or porting the individual components where they get the most reward ...