When running a containerized application on OpenShift, you may want to connect to the running container to run some troubleshooting tools or check the status of a program. You can easily do that with the oc exec or or rsh commands, but there are some use cases, such as latency-sensitive applications, and applications running a busy loop with a real time priority, where you should not do that, and use an alternative instead.

What happens when we run oc exec

The above described process allows us to connect to any running container from our workstation, as long as we have network connectivity to the OpenShift API server. It is a very convenient way, but there is one use case where this is bound to create issues.

There are cases where a containerized application will have a requirement for maximum throughput and minimum latency. Some of these examples include High-Performance Computing, AI or Telco 5G applications. These applications typically require some custom system tuning to remove all potential sources of interrupts from the application, such as hardware interrupts from devices or kernel threads. Such interrupts could cause a spike in latency, which would be unacceptable for the application.

The combination of all the following requirements for one of these latency-sensitive applications can lead to an issue when we try to enter the running container using oc exec:

The following diagram describes the potential issue that could happen when we try to enter the running container using oc exec:

The key to this issue is the fact that, when we enter the pod using oc exec, the new process is only allowed to run on the same set of guaranteed CPUs as the container, without an option to choose on which CPU to run. If the new process is scheduled to run on the same CPU as the busy-loop RT process, there is a risk that it will impact its latency requirements, and in the worst case scenario cause a kernel hang.

Under the above mentioned configuration, connecting to the container using oc exec poses a potential risk. Thus, we need an alternative that allows us to access the container while running on a separate CPU set. For this purpose, we can use the nsenter utility, included by default with Red Hat Enterprise Linux and Red Hat OpenShift.

Nsenter allows us to enter one or more of the namespaces where a container is running. When run from the worker node running the container, we can effectively “get inside” the container without using oc exec. Since the tool is executed from the worker node shell (entered via oc debug node or SSH), it will be running on the set of CPUs reserved for the operating system and services, so it will not affect the workload running on the container. This prevents the risk for a latency spike in the application, or a low priority process starvation. The following diagram shows how this would work. 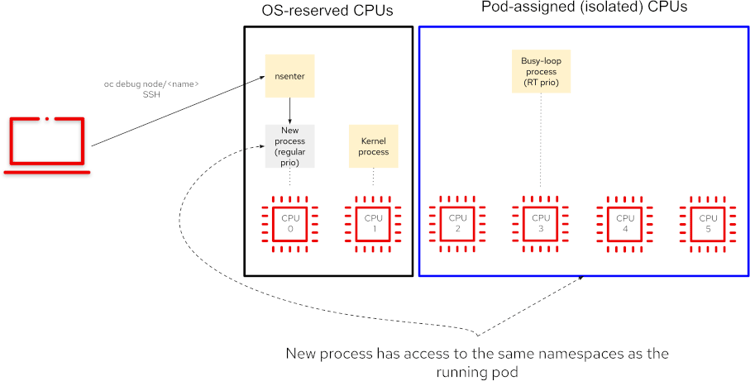 Using nsenter requires access to the worker node and some extra steps to enter the container namespace. Appendix A contains the whole process.

While this process is a way to overcome the limitations of oc exec with latency-sensitive applications, it is not a silver bullet, and oc exec is much more convenient for the general use case. The following table details the differences and requirements for each tool.

In general, running oc exec to connect to a running container is a safe and reliable mechanism. However, there are some corner cases where this may not be advisable. For those cases, using nsenter from the worker running the container is a valid, although more complex, alternative, that avoids placing the executed process in the same CPU set as the running container.

For the future, a better alternative would be to include additional functionality into the oc client, so it can be instructed to start the process in a separate CPU set.

Appendix A: how to use nsenter to access a container namespaces