How to backup, clone and migrate Persistent Volume Claims on OpenShift

I recently implemented a complete backup solution for our Red Hat OpenShift clusters. I wanted to share the challenges we faced in putting together the OpenShift backups, restores, hardware migrations, and cluster-cloning features we needed to preserve users’ Persistent Volume Claims (PVCs).

At the moment, these features are not implemented directly in Kubernetes, and it doesn't come out-of-the-box with any Kubernetes distribution. There are some third-party products and projects that address some of these needs, such as Velero, Avamar, and others, but none of them were a complete fit for our requirements.

The existing options I checked didn’t fit my needs for a variety of reasons:

For this reason I decided to implement a homemade solution. In short, this solution makes it easy to:

This post describes the PVC backup system I put together. Note that this solution addresses only backing up and migrating user volumes, not Kubernetes control plane data and configuration, such as etcd.

Traditionally, backup and restore operations involve two different layers. The first is the application layer. Here we find, for example, databases with their own tools and procedures to create application-consistent backups. The other layer is the underlying storage. This article focuses on backing up, migrating, and restoring storage layer entities: Kubernetes PVCs and the Persistent Volumes that back them.

Some files, such as a database’s backing store, may be written to in an almost constant stream. Backing up these files requires more consideration than backing up files that change less frequently, such as documents, pictures, or finished sound and video used for playback.

Describing best practices for backing up open files and databases is out of the scope of this article, but we tend to use the database’s native tools for backing up & restoring (e.g., mysqldump, pg_dump, etc.). A complete example of this can be found in the OpenShift documentation.

You can use a mix of your database’s backup tooling with the solution described in this article to get complete backups of database snapshots as part of the backup of Persistent Volumes. For example:

The architecture is relatively simple. The core component is a pod based on a custom container image. This pod is responsible for running the backup script. As you can see in the above image, the BackupEr pod has access to the PVC of the MyPod pod that is deployed in the OpenShift Project creatively named MyProject. BackupEr also has its own PVC. When BackupEr starts, it runs the backup.sh script to copy the data from MyPod’s source PVC to its own target PVC.

There you are: A tool to backup, migrate, or clone your PVs inside an OpenShift Kubernetes cluster!

If you want to learn more or refresh your knowledge about persistent storage, check out the Persistent Storage topic in the OpenShift documentation.

If you've followed the security recommendations to setup an NFS server to provision persistent storage to your OpenShift Container Platform (OCP) cluster, the owner ID 65534 is used as an example. Even though NFS’s root_squash maps root (UID 0) to nfsnobody (UID 65534), NFS exports can have arbitrary owner IDs. Owner 65534 is not required for NFS exports.

This means that even if you have root access to the OCP node where the NFS mount point was provisioned, you likely won’t have read/write permissions to files stored on that mount point. The backup script contains a little magic especially for this case:

NOTE: You can see the complete Dockerfile and script at following URLs:
- Dockerfile
- backup.sh

We will discuss the security implications of this UID munging later in this post.

The only constraint here is to deploy the BackupEr pod on the same OpenShift cluster node with the pod/PVC you want to back up. Set the spec.nodeName of the BackupEr pod to the desired OCP node. You can see an example by reviewing the backup-block template.

For the purposes of this article:

In OpenShift (with cluster-admin or similar privileges for steps 1 and 2, and oc adm command from step 3):

To perform a PVC backup, deploy the BackupEr pod:

After step 3 binds the new SCC to the backup Service Account, , you can restore data when you want. You just need to detach your current PVC (the backup source) and attach the PVC with the data you backed up (the backup target):

This won't remove the original backup source PVC, so with a command likeoc rollback dc/myapp, you can switch back to it.

If you’ve been reading closely, you may have noticed that this solution is suitable only in fairly controlled cluster environments, because it has some security caveats:

Admission webhooks call webhook servers to either mutate pods upon creation --such as to inject labels-- or to validate specific aspects of the pod configuration during the admission process. They intercept requests to the master API prior to the persistence of a resource, but after the request is authenticated and authorized.

We are going to use one of the two types of Admission Webhooks, the Validating admission webhooks, that allow for the use of validating webhooks to enforce custom admission policies.

Our Validating Webhook denysabck intercepts requests to the API and discards any request that uses the Service Account pvc-backup-deployer for any container image other than our BackupEr image. You can see this procedure in the code.

Check the Custom Admission Controllers section in the OpenShift documentation for more information.

WARNING: In OpenShift 3.9, Admission webhooks is a Technology Preview feature only.

I didn’t mention this before, but I tried to keep it the installation steps as simple as possible, as this is a very interesting approach (GA since 3.11 and above). I decided to dedicate a couple of lines to this.
The advantage of this approach instead to using “traditional” SCC assignment (oc adm policy add-scc-to-) is that:

You only have to worry about to manage rolebindings.

As the templates are responsible for creating the ServiceAccount and assigning our custom ClusterRole to that ServiceAccount, you don’t need extra commands to start the backup process (this does not change from what we have seen before, in the Backup point).

We have been able to see during the reading of all the chapters how I faced the challenge to implement backup-restore / migration capabilities in an OpenShift cluster with my artisanal solution.

We’ve seen interesting things that come out-of-the-box with OpenShift, like the use of WebHooks and the Role-Based Access to SCCs, and how they can help you to implement cool and secured custom applications.

My solution is unsupported by Red Hat and it is not recommended for production use, but rather, is just to have a customizable solution in case the others doesn't fit you for any reason.
You can reach other interesting solutions, based in an operator approach, in the OperatorHub.io like the etcd, whose operator is responsible for installing, backing up and restoring an etcd cluster (between many other cool features). 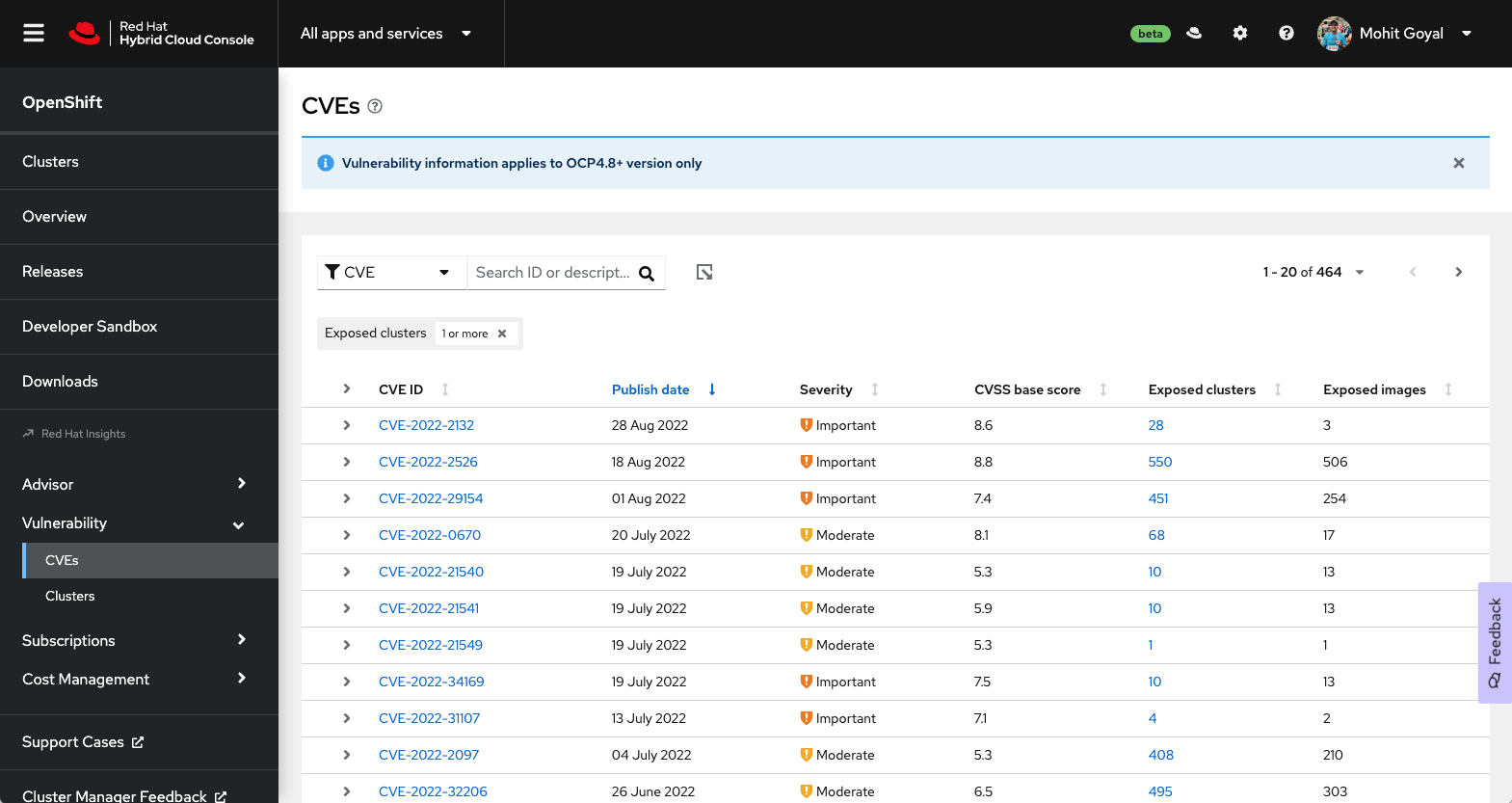 Managing and tracking vulnerabilities is a job unto itself. We've long wanted to help administrators and security personnel to do the job with greater ease. That's why we created the Red Hat Insights ...