The general notion behind this concept is that the platform offers some form of pre-architected and supported approaches to building and deploying a particular piece of software. If a team can “stay” in the path (because the requirements of what they are building allow them to), then they get a supported road to production without having to learn all the details of the technology used to create that road.

This approach accelerates typical application development use cases (onboarding of a new team member, onboarding of a new application), and at the same time, injects the best practices that have been learned in the past. The more sophisticated Golden Paths are, the more they will be adopted, providing, as a result, more uniformity of configuration and behavior across the application portfolio.

So, what is in a Golden Path? It depends on what is being deployed. In the case of an internally developed application, a Golden Path will have at a minimum, the following ingredients:

Golden paths should have the following characteristics:

In my experience working with customers, I find that three levels of maturity for Golden Paths exist:

At this level of maturity, the platform is architected enough to be able to build and run applications, but no Golden Path exists. This is not a trivial level given that the actual ability to build and run applications is not a simple feat and it represents a prerequisite to then start creating Golden Paths. At this level, the platform should have the following capabilities:

At this level of maturity, every development team will have to figure out how to write the pipeline and the deployment manifests. Duplication of efforts and snowflaking are inevitable, but helps establish patterns that can be identified and used later in the process.

At this level of maturity, templates exist for all of the artifacts of a Golden Path. Typical examples include a repository template, a pipeline template and templated manifests. At onboarding time, the developer clones and runs the templates with the specific parameters of the application they are onboarding, and obtains a ready to use set of artifacts. From then on, the developer team is the owner of those artifacts. This creates a bifurcation between the evolution of the Golden Path templates and the evolution of that particular instance. As the drift becomes wider, it gets increasingly harder to take updates from the Golden Path templates (typically teams have to do manual merge operations). Ironically, this situation hurts the early adopters of the platform more because they experience the largest drifts.

At this maturity level, Golden paths are treated as products. Golden Paths will have releases with new features and bug fixes. Unavoidably backward-incompatible releases will happen (such as when a new pipeline step is introduced which requires specific files to be present within the code repository). Developer teams that are using a particular Golden Path will have an opportunity to take the new release when they can afford to do so. One or more Platform teams may be dedicated to maintaining the Golden Paths and treating them as products. This includes, as said, cutting releases, but also creating documentation, release notes, and helping developer teams adopt the Golden Paths. Golden Paths exist to help and serve developers, so it’s important to establish feedback loops with the developer community and make sure that they evolve based upon ongoing requirements.

Here is an example of how to build a simple Golden Path. To make this example concrete, we have to ground in some technology choice. In other words, we need to have some assumption on what the platform does for us (and it must be at the “No Golden Path” maturity level at least).

For the sake of this example, let’s assume we have the following set up: 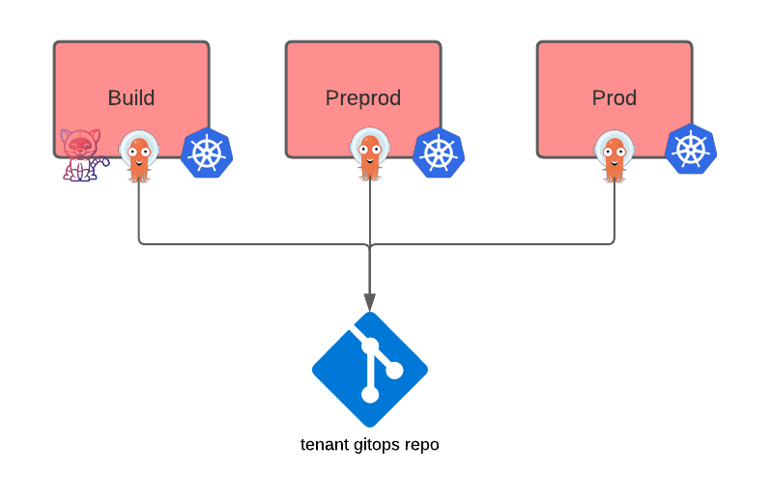 We have three Kubernetes clusters dedicated to running the pipelines (build), QA validations (Preprod) and production (Prod). We adopt GitOps and each cluster is configured via Argo CD. Tekton for running pipelines is installed in the build cluster. A GitOps repository exists for each tenant. A folder convention exists such that when tenants create files in the GitOps repository, it’s understood in which cluster resources will be created (the exact convention is outside the scope of this article).

Each tenant gets some namespace in each of the clusters at onboarding and the Argo CD instances are configured to deploy manifests only in those namespaces (out of the tenant GitOps repository). Credentials and secrets are available in each tenant namespace, based on what the namespace is supposed to do.

Now, let’s assume that we onboard an application using a Golden Path. Here is what it might look like: 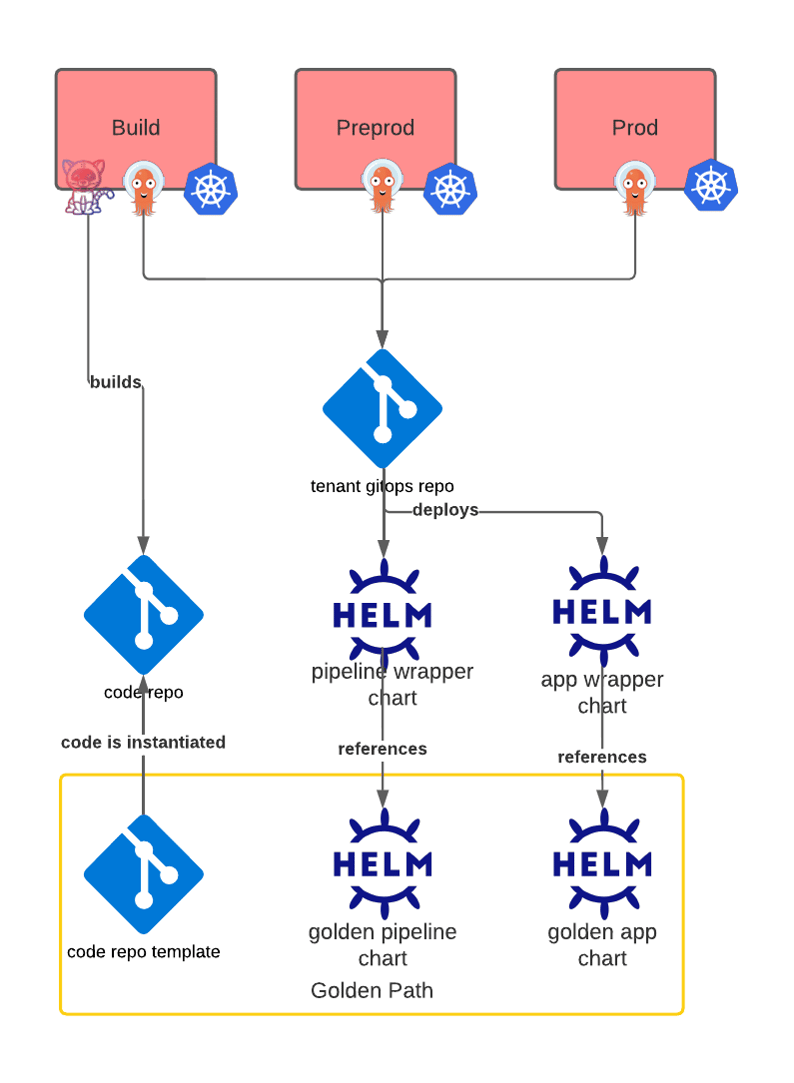 It’s important to note that the golden chart will evolve over time and that with this approach, the application team can take updates as they see fit, simply by incrementing the version of the imported golden chart in the wrapper chart.

Other technologies may have features to allow referencing a reusable, centrally managed artifacts, for example GitHub actions uses reusable workflows and GitLab ci/cd uses the include directive.

Once one has a development platform and Golden Paths in place, a UI can be set up in front of them, to improve the user experience for the developers. Tools like Backstage.

In this post, we discussed some of the main characteristics that a Golden Path should have. We introduced a simple maturity model for Golden Paths and we show an example of how to implement one. Designing good Golden Paths is a prerequisite to being successful with an IDP implementation. Although the IDP concept is still in its early days, the best practice seems to be to get a Golden Path right (i.e. good enough that developer teams will want to adopt it), before starting to build other Golden Paths. Getting started with your first Golden Path is the first step and with the approaches described in this article, it is the hope that they can be used to help increase the likelihood for success.