Traditionally, the creation of a Red Hat OpenShift on AWS (ROSA) cluster required an Identity and Access Management (IAM) user with elevated permissions. However, with the implementation of the Security Token Service (STS) on AWS, IAM users can request temporary, limited-privilege credentials capable of performing administrative tasks without retaining the long-term, elevated level of access reserved for permanent IAM user credentials.

In this document, we will discuss how the STS service can be used to create a ROSA cluster on AWS, providing fine-grained security controls for your cloud operations team.

Source: How to Use a Single IAM User to Easily Access All Your Accounts by Using the AWS CLI (documentation)

Before we look into the STS setup, let’s first see the components required to install ROSA on AWS:

As you can imagine, a permanent IAM user with administrative access to create, modify, and delete that wide array of resources is not preferred. With STS, it is possible to provide administrative access on demand. ROSA breaks this down into four distinct roles that are created during the installation process:

ManagedOpenShift-ControlPlane-Role - This role is responsible for the control plane, including the elastic load balancers, EC2 volumes, and KMS.

ManagedOpenShift-Worker-Role - This is the least privileged role with focus on just the worker nodes, specifically instances and regions.

ManagedOpenShift-Support-Role - This role is for the Red Hat site reliability engineering (SRE) team to support and troubleshoot clusters.

Once the roles and policies are created in AWS, we can visually inspect to see the complete set of permissions ROSA requires. Let’s start by viewing the Managed-OpenShift-IAM_Role, listed among the four primary roles described above:

Digging deeper into the role itself, we can see that this role has the Managed-OpenShift-IAM-Role-Policy applied:

Using S3 as an example, we can see the explicit actions that this policy temporarily permits approved users to execute through STS: 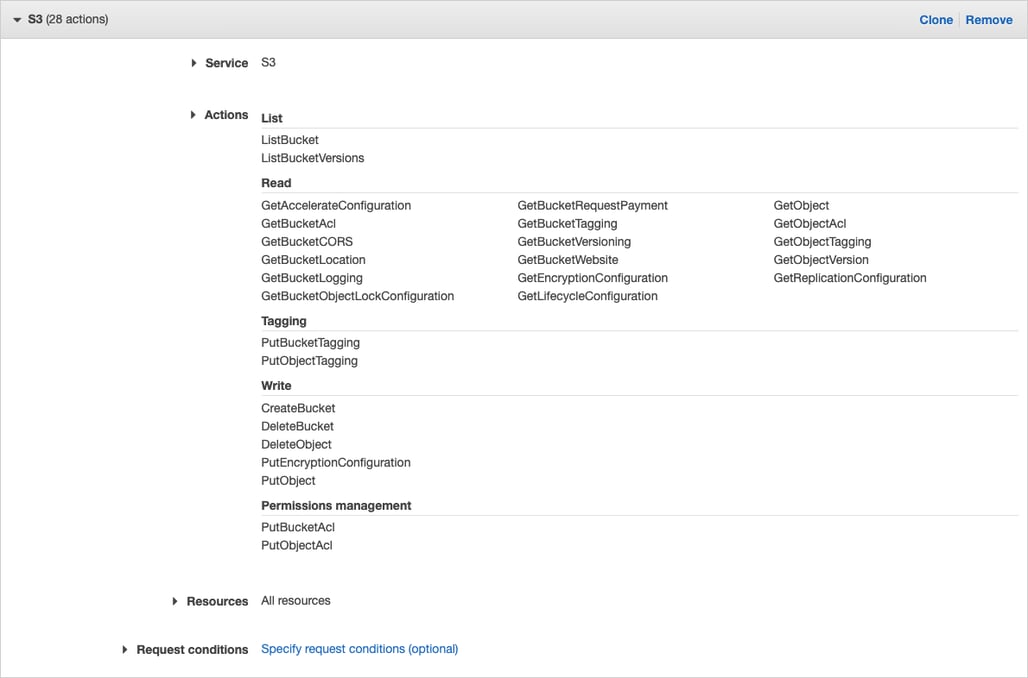 Additionally, we can see that this role has a single trusted entity that can assume it, RH-Managed-OpenShift-Installer:

Along with AWS roles and policies, it is also necessary to set up OpenID Connect (OIDC) access-based IAM roles that  are cluster based, not universal like the four primary roles described earlier.

Once configured, each role will have a trusted relationship through the cluster specific OIDC provider:

With these roles and policies in place, the ROSA cluster creation can proceed as directed in the installation guide. All role management and usage will be automatic through the installer. For Day 2 operations, the existing accounts will continue using STS for elevated access as the situation dictates. Additionally, STS tokens can be revoked on demand through the AWS console and CLI.

The traditional security implementation of permanent, dedicated administrative accounts for infrastructure and platform operations of Red Hat OpenShift on AWS (ROSA) is no longer required. With the implementation of STS, all teams (operations, development, testing, and others.) can have permanent accounts in the cluster with elevated privileges applied only when needed. It is the right level of access at the right time, making the configuration and operation of ROSA more secure and robust than ever before.

Overview The policy framework in Red Hat Advanced Cluster Management for Kubernetes (RHACM) is a powerful feature that help you to govern your configurations across multiple clusters. You can enforce ...

Preface When looking into storage performance such as  Local Disk/OpenShift Container Storage  on a hyper-converged infrastructure or traditional storage, these are the most common types of ...