Containers are Linux. The operating system that revolutionized the data center over the past two decades is now aiming to revolutionize how we package, deploy and manage applications in the cloud. Of course you'd expect a Red Hatter to say that, but the facts speak for themselves. Interest in containers technology continues to grow, as more organizations realize the benefits they can provide for how they manage applications and infrastructure. But it’s easy to get lost in all the hype and forget what containers are really about. Ultimately, containers are a feature of Linux. Containers have been a part of the Linux operating system for more than a decade, and go back even further in UNIX. That’s why, despite the very recent introduction of Windows containers, the majority of containers we see are in fact Linux containers. That also means that if you’re deploying containers, your Linux choices matter a lot.

We’ve talked about this before, including last year at Red Hat Summit. As we gear up for Red Hat Summit 2017, you can expect to hear more from us on this over the next few weeks and more importantly from enterprise customers deploying containers in production today. So when we say containers are Linux, let’s break down what that actually means and why this should matter to you.

A Linux container is nothing more than a process that runs on Linux. It shares a host kernel with other containerized processes. So what actually makes this process a “container”? First, each containerized process is isolated from other processes running on the same Linux host, using kernel namespaces. Kernel namespaces provide a virtualized world for the container processes to run in. For example the “PID” namespace causes a containerized process to only see other processes inside of that container, but not processes from other containers on the shared host. Additional security isolation is provided by kernel features like dropped capabilities, read-only mounts and seccomp. Additional file system security isolation is provided by SELinux in distributions like Red Hat Enterprise Linux. This isolation helps ensure that one container cannot exploit other containers or take down the underlying host.

This ability to both isolate containerized processes and confine the resources they consume is what enables multiple application containers to run more securely on a shared Linux host. The combination of isolation and resource confinement is what makes a Linux process a Linux container. In other words, containers are Linux. Let’s explore some of the implications of this.

Once you understand how containers work, it’s easy to understand that container security is Linux security. The ability for multiple containers to run safely on a shared host is only as good as the kernel’s ability to provide multi-tenant isolation between containers and the underlying host operating system. This includes the Linux kernel namespaces and additional security features like SELinux, provided by the kernel and your chosen Linux host distribution, as well as the security and reliability of the Linux distribution itself. Ultimately, that means your containers are only as secure as the Linux host they run on.

Another important factor is ensuring that the content that runs inside your container is trusted. The docker open source project introduced a layered packaging format for immutable container images, but users still need to ensure that the images they are running are safe. Each container image consists of a base Linux user space layer and then additional layers depending on the application. For example, Red Hat provides base images for Red Hat Enterprise Linux 7 and Red Hat Enterprise Linux 6, and also provides a large number of certified images for various language runtimes, middleware, databases and more via our certified container registry. Red Hat employs a large number of engineers that package image content from known source code and seek to ensure that this content is free from vulnerabilities. Red Hat also provides security monitoring, so when a new issue is detected, a fix is identified and updated container images are released, so customers can in turn update their applications that rely on them.

It’s also easy to see how container performance is tied to Linux performance. A container image is a layered Linux filesystem that is used to instantiate container instances. The choice of Linux filesystem used - OverlayFS, Device Mapper, BTRFS, AUFS, etc. - can impact the ability to build, store and run those images efficiently. Performance and related issues in this area typically involve troubleshooting the Linux host filesystem.

Red Hat has worked with the Cloud Native Computing Foundation (CNCF) to test container deployments on Kubernetes in OpenShift at scale. In our most recent performance benchmark, we tested containers on a bare metal cluster consisting of 100 physical servers and on a virtual machine cluster consisting of 2048 VMs. As you read the results of these tests, you can quickly see how closely tied container performance is to Linux performance. At Red Hat, we rely on the skills and experience of our Linux performance and scale engineering team, and work with customers and the community, to seek to identify the best configuration for running containers at massive scale.

Ultimately, organizations who are adopting containers for their production applications need to know that their containers run reliably. Whether it is questions about security, performance, scalability, or quality in general - the reliability of your containers has a lot to do with the reliability of the Linux distribution it runs on and the vendor that stands behind it. Containers represent a new way to package and run applications on Linux. Red Hat has a long history of supporting Linux for mission critical applications, across both commercial and public sector organizations. Reliability is a hallmark of Red Hat Enterprise Linux and why it has become a de facto standard for Linux in the enterprise. That reputation for reliability is also why Red Hat Enterprise Linux is becoming a standard for running Linux containers in enterprise environments.

So What is Docker?

So if containers are Linux, then what is Docker? That depends on what you are referring to. Most people know of docker as the open source software project launched in March 2013, that automates the deployment of application containers on Linux. The docker project has been one of the most popular open source projects of the last few years, with the docker/docker Github repository garnering over 1,600 contributors and 41,000 stars. The docker container engine manages the configuration of Linux kernel namespaces, additional security features and cgroups and introduced a layered packaging format for content that runs inside containers. This made it easy for developers to run containers on their local machines and create immutable images that would run consistently across other machines and in different environments. The runtime for those containers isn’t docker, it’s Linux.

The Open Container Initiative (OCI) was subsequently launched to create open industry standard specifications for the container format (image-spec) and runtime (runtime-spec). Over the past couple of years, the docker project maintainers have begun spinning out the lower level container runtime plumbing as separate projects, including OCI runC and most recently containerd which was spun out and donated to the CNCF.

If at their core containers are Linux, is it a stretch to say that container vendors are just Linux vendors? Perhaps not.

The Linux operating system is fundamental to the operation of containerized applications - from the kernel, to the filesystem, to networking and more. Containers provide a faster, more efficient and portable abstraction to run applications on Linux across different infrastructure footprints - including physical servers, virtualization platforms, private clouds and public clouds.

As more container deployments move to production, many organizations are asking Red Hat about moving from do-it-yourself container solutions to supported container platforms. Security concerns are often cited as one of the main barriers to container adoption in production. This is the case with any new technology. The same concerns you hear about containers today are what you heard about virtualization in the early 2000s. Many an IT manager back then, when talking about virtualization would say, “Great for development, but I’ll never run it in production!” How times have changed. Today, many organizations run virtualization in production, and not just for simple applications, but for their most complex and mission-critical systems. That same evolution in mindset is beginning to happen with containers.

As more and more organizations deploy containers for their own mission-critical applications, they need to ask the same questions of their container platform vendor as they do their Linux vendor. The same considerations and criteria apply in either case:

Your container platform vendor and your Linux vendor are in fact one and the same.

So why Red Hat for containers?

Red Hat’s contributions to containers go back to the creation of those core container primitives of Linux namespaces and cGroups in the early 2000s. Containers have been a core feature of Red Hat Enterprise Linux over multiple major releases and was the foundation of Red Hat OpenShift since its initial release in 2011. Since 2013, Red Hat has contributed to the docker open source project, becoming the #2 contributor overall. Red Hat was one of the first major companies to announce, back in September 2013, that we would be collaborating on the docker project and has worked with Docker Inc. and a number of other vendors and individual contributors to help make this project what it is today.

Red Hat packages and ships a fully supported binary version of the docker container engine project as part of Red Hat Enterprise Linux 7 and Red Hat Enterprise Linux Atomic Host. This is the foundation for OpenShift, which provides a robust, production-grade container platform that also includes container orchestration with Kubernetes and additional application lifecycle management capabilities, fully supported runtimes, middleware and database services, as well integrated operational management solutions and developer tools. Red Hat provides support for leading projects in the container ecosystem and delivers a comprehensive container platform product. We enable customers to leverage their existing investments in Linux and evolve them to leverage the benefits of Linux containers. We leverage the power of Kubernetes to move them from running individual containers on individual servers, to running complex multi-container applications across clusters of servers, running in their data centers or in the public cloud. We connect that to their applications and their application development processes by adding capabilities to automate and integrate with their build, continuous integration and continuous deployment processes. Finally, we provide operational management capabilities to manage their container platform on the public cloud, private cloud, virtualization platform or physical infrastructure of their choice.

At Red Hat, we saw early on both the potential for containers and the importance of standardizing how people build and run containers. That’s why we’ve committed to being a leader in the upstream container communities and governance organizations. Most importantly, Red Hat has a well-earned reputation as a leader in Linux over the past 15+ years and a proven track record with customers. As more of these customers move from running applications on Linux, to running applications on Linux containers - those same organizations and more are again trusting Red Hat to lead the way. 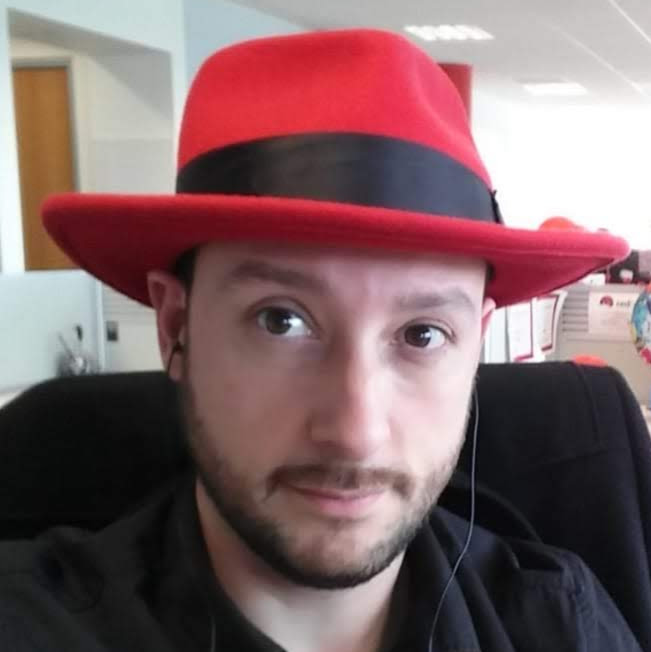 A Day in Life of Senior Software Maintainance Engineer-Alexis Solanas

We have quite a few positions open here, at Red Hat right now. You may have seen some of our previous blog posts listing open roles. We even have two roles that just opened up in time to be included ...

A primary goal of businesses is to select applications that enable their business to do more with less. With security tools, the need to be more cost-effective and allow development teams to innovate ...

We’re excited to see many of you next week (in person and virtually) at our first GitOps Con North America! The inaugural event kicked off earlier this year at KubeCon EMEA and over a thousand ...