UPDATED 12/18/2020: Red Hat OpenShift support for Windows Containers is now generally available (GA) and the Windows Machine Config Operator should now appear in the Operator Hub for OpenShift customers. For more information, see the Release Notes in the documentation.

We are proud to announce support for Windows Containers in Red Hat OpenShift will be here in a few weeks. As we are coming to the end of the year, we figured you could spend a little of your leisure time with us to learn how this new feature of OpenShift will allow you to get full support for running Windows worker nodes. Before we delve into the details, let’s start with some basics. Accelerate your public and hybrid cloud strategy: Windows Server enjoys a significant presence in the server operating system market, and C# is one of the top six programming languages. There is an enormous opportunity to accelerate customer adoption of Windows Server applications to public cloud via containers.

Reduce infrastructure and management costs for Windows applications. You do not need to spin up an entire virtual machine to run your Microsoft SQL database or your IIS web server. The small, lightweight nature of containers provides more density and allows them to be moved easily across bare metal systems as well as public, private, hybrid, and multi-cloud environments.

Gain applications portability, agility, and control: Containers provide an attractive means of application packaging and delivery because of their low overhead and greater portability. Instead of virtualizing the hardware and carrying forward multiple full stacks of software from the application to the operating system, Windows containers rest on top of a single Windows operating system instance. Applications can then be built in Visual Studio or Visual Studio Code, containerized, and run anywhere, such as on OpenShift on premises, OpenShift on Azure, or OpenShift on AWS.

Use Cases for Windows Workloads on OpenShift

Based on Gartner’s 5R approach to application modernization, here are the different use cases for running Windows workloads on OpenShift:

The Windows Machine Config Operator (WMCO) is the entry point for OpenShift customers who want to run Windows workloads on their clusters. The intent of this feature is to allow a cluster administrator to add a Windows worker node as a day 2 operation with a prescribed configuration to an installer provisioned OpenShift 4.6 cluster and enable scheduling of Windows workloads. The Prerequisite is an OpenShift 4.6+ cluster configured with hybrid OVN Kubernetes networking.

The Windows Machine Config Operator configures Windows Machines into nodes, enabling Windows container workloads to be run on Red Hat OpenShift. The operator is configured to watch for machines with a machine.openshift.io/os-id: Windows label. The way a user will initiate the process is by creating a MachineSet which uses a Windows image with the Docker* container runtime installed. The operator will do all the necessary steps to configure the underlying VM so that it can join the cluster as a worker node.

Once the openshift-windows-machine-config-operator namespace has been created, a secret must be created containing the private key that will be used to access the Windows VMs:

The way a user will initiate the process is by creating a MachineSet which uses a Windows image with the Docker container runtime installed.  It usually takes about 15 minutes for the Windows Machine to be configured as a worker node. Ensure the Windows Node is in a Ready state before deploying a workload

The operator is configured to watch for Machines with a machine.openshift.io/os-id: Windows label. The operator will do all the necessary steps to configure the underlying VM so that it can join the cluster as a worker node.

As a cluster administrator, you can upgrade the Windows Machine Config Operator (WMCO) that has been previously installed using Operator Lifecycle Manager (OLM) on your OpenShift Container Platform cluster.

When a new version of WMCO is released that is compatible with the current cluster version, an operator upgrade will take place, which will result in the Kubernetes components in the Windows Machine being upgraded. If the approval strategy in the Subscription is set to Automatic, the upgrade process initiates as soon as a new Operator version is available in the selected channel. If the approval strategy is set to Manual, you must manually approve pending upgrades.

The procedure for an upgrade is as follows: The ability to view logs is a basic requirement for debugging purposes and is commonly used by most customers. It is also critical for security as logs are used to figure out if a malicious event occurred or if secrets were being leaked. For Windows containers in OpenShift, here are the available logs and methods to collect them:

You can view OpenShift Container Platform cluster logs for Windows pods in the CLI:

You can collect the following logs with must-gather: 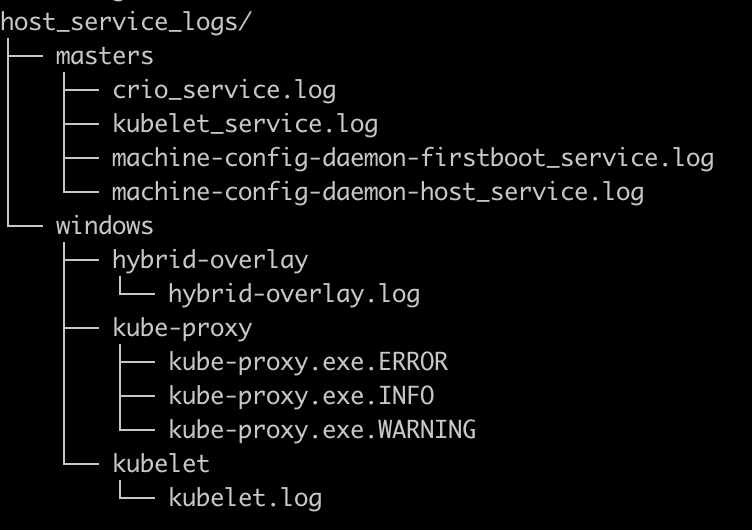 Please note that viewing logs in the OpenShift Container Platform web console is not yet supported for Windows pods.

When you get back from your end of year holidays, Windows Container Support for Red Hat OpenShift will be waiting for you, giving you full support for running Windows worker nodes. Please take the Windows Machine Config Operator for a spin from the on-cluster #OperatorHub and provide feedback by opening GitHub issues.