An Introduction to GitOps

GitOps is a term that has become very popular in the last few years and is easily on its way to becoming just as overloaded with myth and mystery as DevOps. Some definitions of GitOps describe it as a mechanism for delivering and maintaining the infrastructure on which Kubernetes applications run. Other definitions include the infrastructure focus, and augment it with the definition of a business application that has been created for the platform. In this series of articles, we will present the principles and practices of GitOps, explaining the why and how of the automated processes that aim to deliver secure, high-quality, microservice-based applications quickly and efficiently.

The objectives and benefits of a GitOps approach are easy to see. By storing the definition of the required infrastructure, and/or application configuration, in a Git repository, teams have everything required to deploy the application in a structured and secure storage. If the application needs to be redeployed to a new location, for reasons of disaster recovery or for resilience, then it is possible to do that with both ease and confidence. Additionally, the GitOps model will help organizations to progress applications through various testing phases on the way to production. This process necessitates the deployment of an application to different clusters, or different namespaces within a cluster, and the GitOps model ensures that this can be done completely, reliably, and with confidence.

There is a clear distinction between the two domains of infrastructure and applications, with different teams of an organization responsible for each area. Infrastructure configuration takes care of the definition and delivery of the Kubernetes platform, in terms of the compute nodes, operators, role-based access control, governance policies, and many other attributes that create a platform on which applications can run. Applications can be segmented into the source code components that are compiled to an executable within a container image and the Kubernetes resources that configure the container images within a specific environment.

The guiding principles of GitOps are simple to articulate:

There are many more core tenants to a GitOps approach underpinned by the cultural and technical principles of DevOps. So while there is probably no right and wrong answer to "What is GitOps,'' the answer probably lies somewhere within the automation that delivers value and a working practice that allows change to be recorded, propagated, and rewound as required within an organization.

In simple terms GitOps is the process of defining the single source of the truth for an application configuration in a Git repository. If teams wish to make changes to the configuration of an application, then they simply modify the files in the appropriate Git repository and sit back for the automation process to update the application. Extensions to this process can involve the use of external ticketing systems and pull requests in the Git repository to ensure that only approved and appropriate changes are propagated to production environments.

There are many source code management systems available, but as the name suggests, Git is at the heart of a GitOps approach. Any source code management system that provides a Git type interface can be used, and for the remainder of this document, any reference to Git will assume GitHub, since that is what is used for development and testing of the content in this article.

The interaction of the source code management system with the GitOps model is based on the following criteria:

1: The ability of the source code management system to trigger external processes when specific actions are performed within it. For example, a commit of new source code to a specific branch may cause an application build to begin. The build process will start by cloning the latest version of the source code from the relevant branch. Alternatively a merge operation may trigger a build process to begin. These are examples of “push” triggered actions in which a change to the source code management system causes an external event. When such trigger events occur, a specific URL is sent a webhook payload of data about the event. The push model is shown in figure 1, with a ‘git push’ action from the user. Note that other Git actions could be used such as pull-request creation.

2: The ability of the automated deployment solution to monitor the source code management system to identify new commits. This will allow actions to be triggered in a “pull” mode in which an external entity takes a decision to perform an action after observing a change in the Git content. There is no payload content included within the pull model directly, and the external system must request any information that it needs.

The pull and push based trigger operations will be used for different aspects of the GitOps model.

The automation technology behind GitOps

To facilitate the pull and push models above, teams require automated software solutions. The open source solutions that are included in a Red Hat OpenShift subscription, and that are fully supported by Red Hat, are described below:

Red Hat delivers a supported and integrated implementation of the Tekton open source project as OpenShift Pipelines. This provides a complete, continuous integration process capable of performing software builds, container image creation, container image management, testing operations, and security scanning with a variety of testing and validation solutions. OpenShift Pipelines operates by executing commands within container images that perform discrete steps of a pipeline process. Any command line utility that can be hosted within a container image can be used. Tekton Triggers can be used to respond to webhook requests from GitHub so that the Tekton pipeline can be executed as a result of an action in GitHub (or other source code management solution).

Pipeline assets are delivered as YAML files that are created as resources, within a specific namespace, on the OpenShift cluster. The upstream project name “Tekton” is often used to refer to OpenShift Pipelines.

Red Hat delivers a supported and integrated implementation of the ArgoCD open source project as OpenShift GitOps. This provides a complete, continuous delivery process capable of monitoring GitHub repositories and ensuring that Kubernetes resources on the OpenShift platform are maintained in synchronization with the content in the GitHub repository. ArgoCD applications are used to monitor a specific set of files within a GitHub repository and to create the necessary Kubernetes resources. ArgoCD can be used to deliver to the cluster resources required for the application, and ArgoCD can also be used to deliver OpenShift Pipelines resources such as tasks.

Further information on the use of both solutions will be provided in future articles.

Different categories of content need to be stored in different Git repositories. This will facilitate a practical organizational structure, and it will also allow content to be managed with different roles based access control mechanisms depending on who is allowed to read and/or write content based on their role within the organization. In this example, the following list shows the overall structure and content of repositories to be used:

There are a number of moving parts in this scenario, so it is important to understand which technology is responsible for creating which content.

The Tekton pipeline is a set of Kubernetes resources created in a specific namespace. An ArgoCD application is responsible for the creation and ongoing synchronization of the Tekton resources from a GitHub repository.

The new container image needs to be deployed to a development environment (namespace) on the OpenShift cluster. This involves the use of deployment, service, route, and others. YAML files are stored in a GitHub repository. An ArgoCD application is responsible for the creation and ongoing synchronization of application resources from a development directory of a GitHub repository.

In the same manner as for the development environment, the new container image needs to be deployed to a QA environment (namespace) on the OpenShift cluster. An ArgoCD application is responsible for the creation and ongoing synchronization of application resources from a QA directory of a GitHub repository. 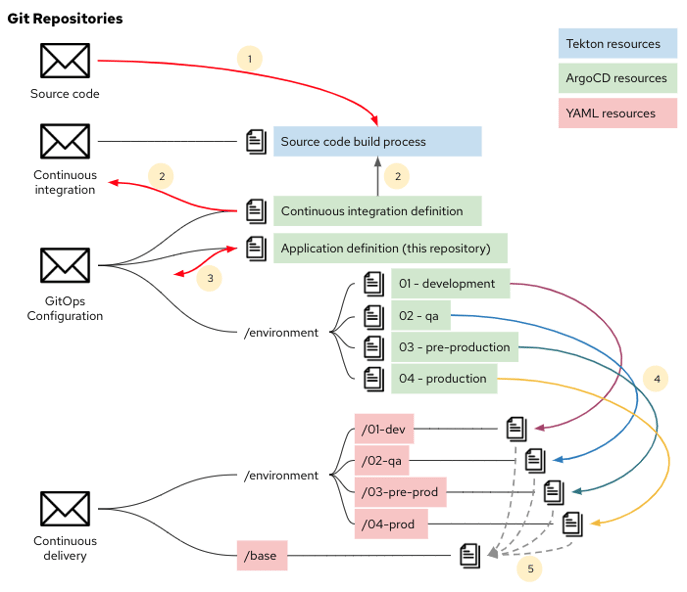 Step 4 of figure 3 shows the introduction of the continuous delivery process. To deploy the application to an environment requires a set of YAML files, which typically include a deployment, service, route, config maps, secrets, persistent volume definitions, and others. These assets are stored in the continuous delivery repository within a directory structure that allows a base set of common resources to be defined (step 5), together with overlays of specific files for environmental variance. To deploy each set of environment-specific Kubernetes resources, it is necessary to create an ArgoCD application for each environment. For example, to deploy the application to the 01-dev environment, an ArgoCD application is created that refers to the /environment/01-dev directory within the continuous delivery Git repository. The use of the ArgoCD application ensures that any changes made to the content of the /environment/01-dev directory are faithfully applied to the Kubernetes environment. As an engineer working on the deployment of applications to each of the environments, all I have to do is make changes to the YAML files, commit them to the Git repository, and allow ArgoCD to apply those changes to the Kubernetes environment. If a new environment is to be introduced to the route-to-live, then the team performs the following tasks:

The assets used in the development of this series of articles can be found in the GitHub repositories indicated in figure 4.

Further information on how to use the above assets and additional resources such as required secrets will be provided in further articles.

A developer of the application source code can make changes to code and be assured that their commits will be picked up and built by the automated Tekton process. An environment engineer can make changes to how the application will behave by updating and committing to Git the Kubernetes resource files. A deployment automation engineer can create new environments and define ArgoCD applications to reference them by adding new files to the configuration repository.

All assets relevant to the creation, build, and deployment of the business application are held securely within the Git repository where they are subject to access control, audit, and logging.

In subsequent articles, further exploration of the processes will take place. Specific areas of focus will be: