VolumeSnapshotMover provides portability and durability of CSI volume snapshots by relocating snapshots into an object storage location during backup of a stateful application. These snapshots are then available for restore during instances of disaster scenarios. This blog will discuss the different VolumeSnapshotMover components and how they work together to complete this process.

One of the more important components of VolumeSnapshotMover to understand is CSI, or Container Storage Interface. CSI provides a layer of abstraction between container orchestration tools and storage systems such that users do not need to be informed on the differences between storage provider's needs and requirements. It also provides point-in-time snapshotting of volumes.

CSI volumes are now the industry standard and are the storage backing for most Cloud Native applications. However, issues concerning CSI volumes still remain. Some volumes have vendor-specific requirements, and can prevent proper portability and durability. VolumeSnapshotMover works to solve this case, which will be discussed more in the next section.

You can read more about CSI here.

During a backup using Velero with CSI, CSI snapshotting is performed. This snapshot is created on the storage provider where the snapshot was taken. This means that for some providers, such as ODF, the snapshot lives on the cluster. Due to this poor durability, in the case of a disaster scenario, the snapshot is also subjected to disaster.

With volumeSnapshotMover, snapshots are relocated off of the cluster to the targeted backupStorageLocation (generally object storage), providing additional safety.

OADP is the OpenShift API for Data Protection operator. This open source operator sets up and installs Velero on the OpenShift platform, allowing users to backup and restore applications. We will be installing Velero alongside the CSI plugin (modified version).

The upstream Velero plugin for CSI is modified to facilitate CSI volumesnapshot data movement from an OpenShift cluster to object storage and vice versa.

VolSync is a Kubernetes operator that performs asynchronous replication of persistent volumes within, or across, clusters. The replication provided by VolSync is independent of the storage system. This allows replication to and from storage types that don’t normally support remote replication. We will be using Volsync’s restic datamover.

The VSM controller is the CSI data movement orchestrator, it is deployed via the OADP Operator once the datamover feature is enabled. This controller has the following responsibilities:

The data mover process will be based on two Custom Resource Definitions: 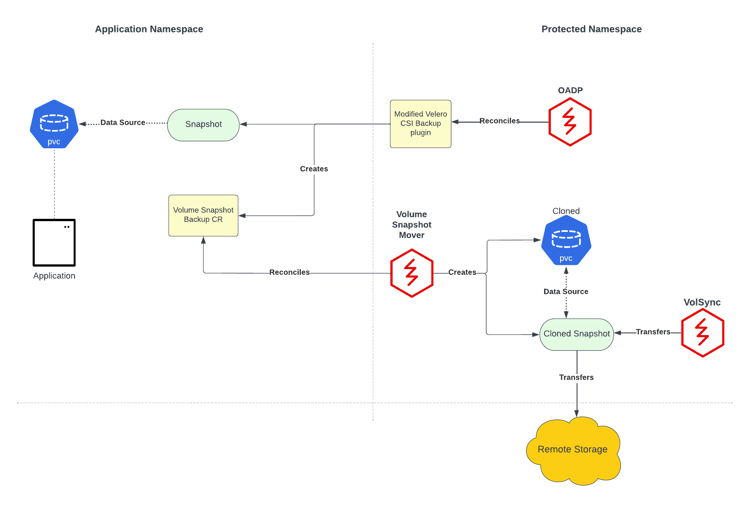 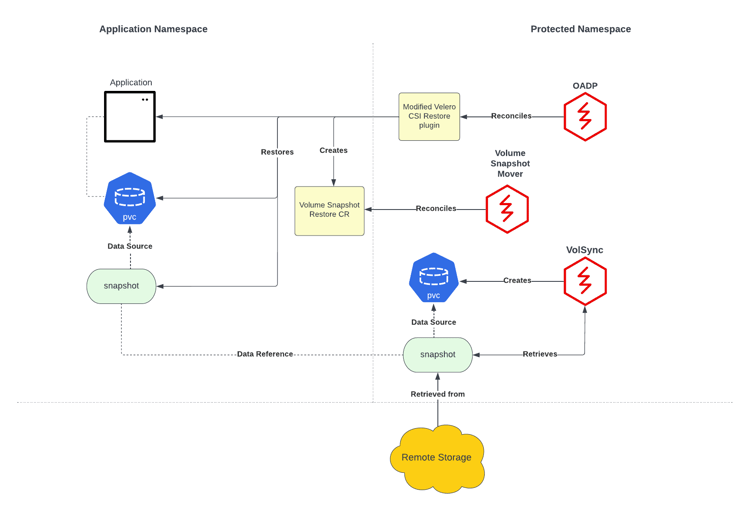