A Guide to Base Image Vulnerability and Tracking

Base Image Vulnerability and Health Tracking

A core component of containerizing applications is the base image which is used for building the application. Red Hat provides (RHEL and UBI), OCI-compliant container images which include the base operating system, middleware as well as complementary runtime languages for development in containerized environments  The Base images  are offered via the Red Hat Container Catalog and offer a supported path forward for development, relieving developers from the burden of maintaining and rebuilding the base image(s). With security in mind, understanding the support cycle of OS base images,  identifying vulnerability data and understanding rebuild cycles and related processes can be a key in successful container adoption. The following information is a high level overview to provide information on identifying and tracking vulnerabilities in Red Hat base images as well as vulnerability tracking in general.

CVE vs CVSS vs RHSA

Common Vulnerability Scoring System is an open framework for communicating the characteristics and severity of software vulnerabilities. Understanding CVSS (baseline) scores and how these are evaluated per vendor (In this case Red Hat) is an important factor for success when evaluating risk. Vendors may evaluate vulnerabilities with focus on their specific implementation and release vulnerability information specific to a base image, which also determines prioritization of a fix. CVSS is an overall score assigned to a vulnerability, which differs from the CVE itself.

Red Hat Security Advisories document security flaws specifically in Red Hat products, including base images. Information such as specific severity, affected products, links to tickets and the like can be found in an RHSA.

Red Hat rates the severity of security issues using a four point scale (Low, Moderate, Important and Critical) as well as a separate CVSS base score.

The  base RHEL and UBI Images build cycle:

A variety of data sources exist for researching vulnerabilities, risk and updates.  It is recommended to utilize the vendor (Red Hat) supplied data as a source of truth. The following links are provided to assist in researching Red Hat security information and base image updates.

Below is a base image with vulnerabilities present. Utilize the “security” tab for the standalone image security data. 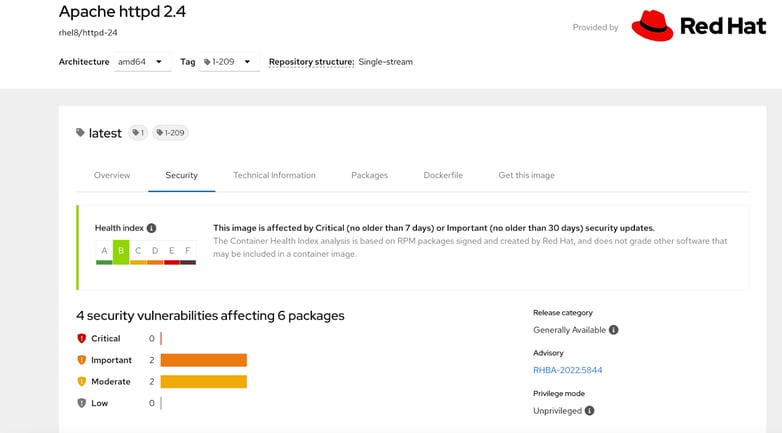 CVE’s present in the image are shown below. In the right hand column you can see the RHSA and a link to more information on the Advisory that provides synopsis, severity, description, solution, etc.

From the RHSA link, additional data is available for synopsis, type, solution, etc. 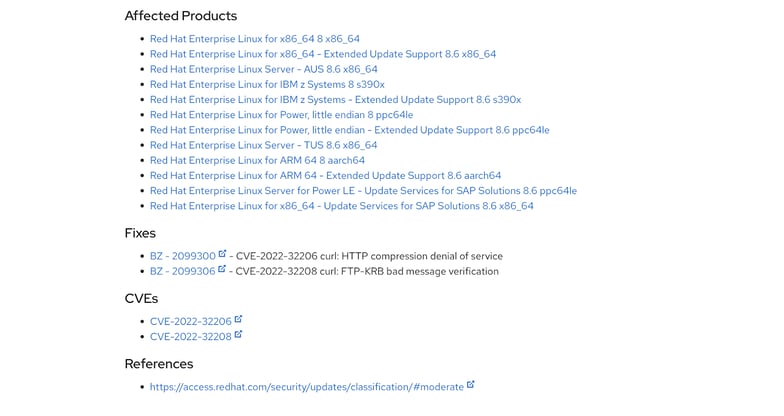 From the “fixes” link, there is public access to Bugzilla information and data that can be utilized to see what is taking place to resolve the issues. (It is important to note that moving forward JIRA may be adopted in some products.)

Using the dashboards and tooling above, customers can track base images and vulnerabilities and maintain better knowledge around the status of the base images utilized in their environment(s). Utilizing the Red Hat supplied base images, you remove the base OS  maintenance from your development teams and rely on Red Hat as a trusted source for timely upgrades.